I happened to see this design (or see below) for a pergola, and I thought, "What an easy way to have a Sukkah frame up all year round!"

But then, when I noticed that it only has a depth of four feet, I realized it wouldn't be large enough to entertain.

But then I thought, what if one were to put up two of these pergolas, facing one another, with about a two or three foot gap between them, and lay bamboo across the top, so that it also covered the gap? Then you'd have a Sukkah that would be, without any gap, 8'x12', or with a two foot gap it could be 10'x12'. Now you're talking about a pretty roomy, and attractive, Sukkah!

But ... what about that gap? Sure, the Sechach is covering the gap at the top, but would the gap in the walls be a problem? 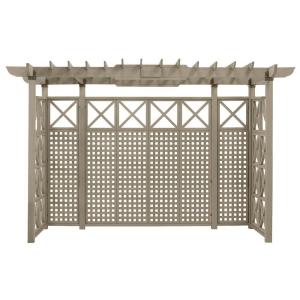 (As an aside, although I should really look into it more closely to be sure, I'm fairly certain that the walls themselves are acceptable, because a fence of a similar structure is used for an 'Eruv that has been approved by my rabbi. Hence, I'm only asking about the gap. If you see a flaw with the walls themselves, feel free to point it out in the comments, but also realize this is an academic question, as I do not intend to purchase two, or even one, of these products, given the cost, and I'm just curious about what is valid vis a vis a gap in a wall. So, if you do see a flaw, just assume that the same structure can be made with an improved wall, yet the gap would still be at issue here.)

If one has two walls parallel to each other (1 and 2 in the diagram), he can place a four tefachim wall (3) within three tefachim of (Gap A) and perpendicular to one of them to make the whole sukkah kosher. Some say he needs to put a gateway (tzurat hapetach) across that gap (A). If he wants he can put a larger solid wall (3) and a smaller gap (A) (even zero gap) so long as the solid wall (3) makes it at least seven tefachim (the minimal length of a full wall) from the side wall (1). (Shulchan Aruch OC 630:3) This is true if the gap (Gap B) from the short wall (3) to the far side wall (2) is less than 10 amot. If it is more than that it (B) requires a tzurat hapetach, although the Rambam says that a tzurat hapetach only works on a gap (B) of more than 10 amot if the 'short wall' (3) is of greater length than the total gap (A+B). (OC 630:5) 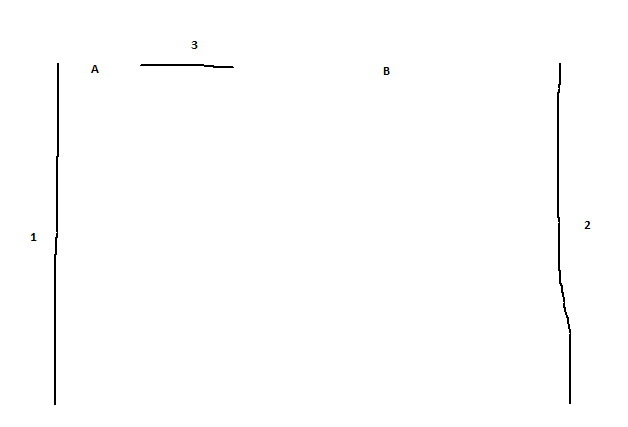 So you could put those two sukkot with a 10 amot gap (~15 feet) to make your sukkah 23x12 or even longer if you use a tzurat hapetach and don't hold like the Rambam (which people who hold of most city eruvin don't).

It goes without saying that the entire in between area must be covered in schach.

Not the answer you're looking for? Browse other questions tagged halacha sukkah architecture-design .

5
Gud Asik in Halacha
4
Why must a sukkah have three walls?
3
Is there a way to expand a canvas Sukkah?

3
Is a covered sukkah wall counted as a wall?
5
Advice for Lighting in a Sukkah
3
Is there a way to expand a canvas Sukkah?
3
Putting up scach before walls of sukkah
2
May Sukkah walls be made of living things?
3
Can flowing water be used as walls for a sukkah?
2
Replacing sukkah walls one at a time after schach is already on the succah
5
Must the top of a sukkah be level?