Carrying in a partially shared apartment on Shabbat

I read that carrying between different units of a multi-family apartment might be a problem on Shabbat. I seek the general rules that will govern the following types of situations:

(To illustrate, I will use the following artificial floor plan: 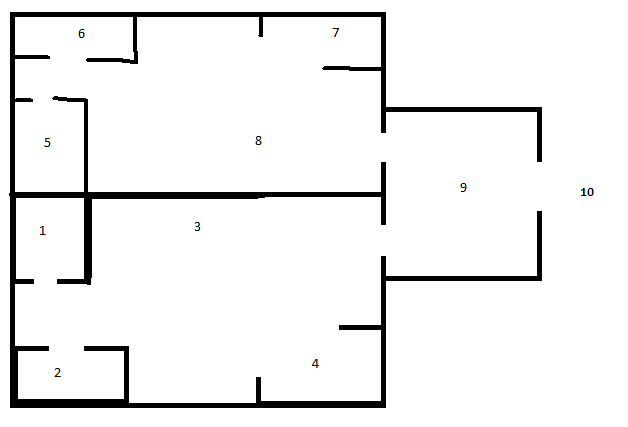 Additionally, do the following things matter?

This appears to me to be a marr'it eyin issue (as seen from The 39 Melachot books page 1318, though other sources would be appreciated). As such, does having some sort of signage or similar device remove the prohibition?

(My understanding is that so long as it is all one totally enclosed space it is all one reshut hayachid and thus carrying would not otherwise be a problem.)

Between 9 and the other two residences you need an eruv chatzeiros - other than the roof over 9 (if it has one) that's the classic case where you need one. (Unless you all eat together in room 9.)

Is this a rental? If it is that may make handling the non jewish ownership easier.

Not the answer you're looking for? Browse other questions tagged halacha shabbat hotzaa-carrying-reshuyot marit-ayin home-house .

6
What are the rabbinic opinions about an apartment building requiring an eruv?
13
If you realize you're carrying on Shabbat, what's the best thing to do?
5
Mezuzot for shared apartment
0
carrying versus transferring on Shabbat
1
May a Jew have non-Jew carry items on Shabbat for the Jew's use?
2
How accurate is Erich Fromm's interpretation of the Shabbat?
0
How much is Rabbi J.D. Bleich's exegesis about Targum Onkelos on Deuteronomy 23:18 really shared in the Jewish tradition?
0
Eruv Chatzeiros for apartment buildings for weeks that the eruv goes down
1
Why are gentiles forbidden from keeping Shabbat if Adam and Even are considered to have lit the first Havdalah candles?