How old do you have to be to learn Kabbalah? (I think its 60 ) but it seems everyone learns it anyway (Maharal, Chassidus). Is there a defense or is it just done?

As others have said, the Shach (the Sifsei Cohen), says that one must be 40 before they can learn kabbalah.

Even though there is an opinion that one should not begin to study Kabbalah until the age of 40, the great masters of Kabbalah and Chassidut did not agree with this opinion. Some of the greatest teachers of Kabbalah--including the Ari, Rabbi Moshe Chaim Luzzatto (also known as the Ramchal), and Rebbe Nachman of Breslov--did not live to the age of 40! From an early age they began to study Kabbalah. In the Zohar we find that a sign of the coming of the Mashiach is when children will study and discuss Kabbalah.

As far as Chassidus is concerned, the Lubavitcher Rebbe said many times that this age limit referred to the time before the Baal Shem Tov. To quote from AskMoses.com

The Lubavitcher Rebbe explains that this [age limit] applied before Chassidut - the teachings of Kabbalah as prepared for the masses - was revealed to the masses by the Baal Shem Tov and Rabbi Schneur Zalman of Liadi, founder of Chabad Chassidut. During that time, the esoteric parts of Torah were considered to be a luxury, and only an elite few were privileged to be privy to Torah's inner dimension, and it was necessary for one to have exceptional knowledge and wisdom to study kabbalah.

Today, however, chassidut has been prepared for, and revealed to, everyone because it isn't a luxury anymore. Today, chassidut is necessary in order to be able to live as a G-d fearing Jew who loves and fears G-d. The longer the Galut progresses, the darker (spiritually) it becomes. In order to combat this darkness it is necessary to have the powerful light of chassidut.

Inner.org, the website of the famous contemporary kabbalist Rabbi Yitzchak Ginzburgh, says that the reason for the age limit was the concern that the knowledge of kabbalah could be misused:

The reason that some authorities have warned against studying Kabbalah at too early an age was that there were instances in Jewish history, even relatively recently, when most negative phenomena resulted from the misrepresentation and misuse of Kabbalah. For example, approximately 350 years ago, a misguided Jew, Shabbetai Tzvi, proclaimed himself the Messiah, basing himself on misinterpretations of Kabbalah. Before he was proven a fraud, he had wrought great material and spiritual suffering upon a significant portion of European Jewry.

However, it goes on to say, Chassidus is not susceptible to this problem:

This is one of the reasons that the Ba'al Shem Tov revealed a new dimension of Kabbalah--Chassidut. Chassidut expresses Kabbalah in a way that is accessible to every soul and that excludes all possibility of misinterpretation. Thus, it is highly recommended to study Kabbalah within the framework of Chassidut. When Kabbalah is studied within this framework there is no danger. If there is no danger, there is also no age barrier or other limitation on the study of the inner dimension of Torah.

Excellent source quoted by AY. Regarding Maharal and Chasidus, the danger with Kabbala is in the misinterpretation of it. There is no danger in learning kabbala pre-filtered and presented by mumchin in a ready-to-serve manner. See also the end of hakdamas haramban al haTorah.

2) Rav Yitzchak Kaduri zt'l writes that one doesn't need to be 40 (based on the lack of any qualifier, I can imagine he didn't think there was an age) 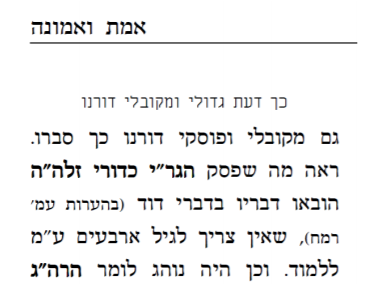 21
What are the essential books which every Jew should own?
10
Proper Way of Learning Jewish Mysticism
6
Conditions for Learning Kabala
6
Learning Kabbalah from other students of the Arizal?
3
Learning the entire night of one's 20th Birthday?
2
Age for Studying Academic Scholars of Kabbalah

11
Is it important to learn Mishnah before Talmud?
4
What should a Jew learn regularly?
5
What are the "four worlds" in Kabbalah?
3
Are there any "prerequisite" masechtot?
11
I am 15 years old and do not go to a Yeshiva but would like to learn Talmud. A few rabbis near me said they could teach me. How should I start