Why do Lubavitch talisos ensure tzitzis hang off the side?

A Lubavitch chasid's talis gadol has a special way of being tied that ensures that the tzitzis hangs off of the side of the talis and not off of its front or back. 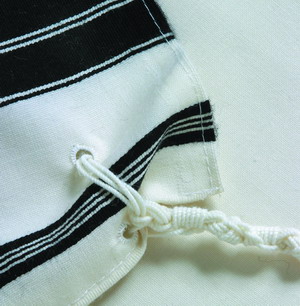 In his Piskei Siddur, the Baal HaTanya writes that the hole the strings come out of should be more than the width of thumb from the corner of the garment. This is learned out from the fact that it says the strings should be "Al Kanfei" (On the corners) and not "In the corner".

The Baal HaTanya learns out from the verse (Devarim 22:12) "גְּדִלִים, תַּעֲשֶׂה-לָּךְ, עַל-אַרְבַּע כַּנְפוֹת כְּסוּתְךָ" that from the hole until the first knot is not considered part of the strings (Gedilim), which is why it is not counted when measuring the length of the strings.

Therefore, even the first knot should be a little more than a thumb's width from the corner of the Tallit Gadol.

When softer material started being used to make the Garments (as displayed in the picture in the question), it was possible for the strings to slip down, causing the first knot to get closer than the minimal thumbwidth's requirement. So that people wouldn't constantly have to check the position of the first knot during prayer, the Baal Hatanya said to add a small hole and thread the largest string through it, after making the first knot. This would prevent the knot from slipping down.

[The Baal HaTanya also holds that the hanging strings should touch the corners, which is why the knot is tied on the side and not the bottom, see here. However, this is not the reason for the little hole (it is why the hole is placed where it is, but it is a separate thing).

This is not necessary on a Lubavitcher's Tallit Katan, since the strings are threaded through a double hole, and the first knot is tied right there. There is therefore no problem with ensuring that there is a minimal thumbwidth's (and a little extra) space from the knot to the corner. See here for illustrations.

Actually there are others who were concerned over the issue, which, as SethJ notes above, is referred to as notef al hakanaf, meaning it should hang down along the side, not from the bottom.

The Chazon Ish held that you should tie the first knot really snug so that it bunches up the fabric, and that way the tzitzit won't budge. You see a lot of avreichim (at least here in Eretz Yisroel) who follow this shita.

But according to some opinions, if you bunch up the fabric, you no longer have a shiur (the minimum is the distance from the joint on your thumb to the end of your thumbnail).

So one of the Lubavitch rebbe's came up with a very innovative solution, as shown in the photo (that same photo happens to appear on my webstore).

This problem is why some of the top-end talleisim (e.g. "Chatanim") have a slightly stiffer wool corner reinforcement.

Not the answer you're looking for? Browse other questions tagged minhag chabad tallit-gadol tying-knots-kosheir .

8
Why do some pairs of Tzitzit have one hole on each corner and some have two?
1
Tying tzitzis with two holes
1
Tzitzit: Do they hang straight down from the corner or do they hang from the side, past the corner?

8
Why does Lubavitch eat in the Sukkah when it rains?
5
Little knots of wool on the bottom/side of the Tzitzit
16
Why is the Lubavitch custom to have short Peoth?
7
Why do Lubavitchers fold their talisos under, on the shoulders?
2
closest successor of the Lubavitch Rebbi today
3
Right side or left side of the mechitzah
1
Why does the leader wear a talis on the first night of s'lichos in a Chabad synagogue?
5
Taking off shoes at the Ohel
4
Why are tzitzis on a tallis katan tied the way they are?