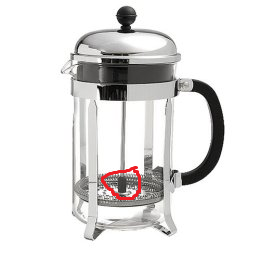 On a French press, there is a piece that sits on the bottom of the plunger rod above the filtering discs called a shoulder nut. The purpose of this piece is to keep the filtering discs plunged down and in place so they don't tilt and allow the coffee grounds to pass between the discs and carafe when the coffee is poured into a cup.

My piece recently came loose and the company sent me a metal replacement that screws on (the original piece came attached to the plunger). Does this require tevila since it touches the food, or not since it isn't directly preparing the food?

Insofar as it sounds like the shoulder nut is not normally removable and is necessary for the proper functioning of the French press, I believe that not only does it not require tevilah (immersion in a mikvah) the fact that the Jewish owner must preform this assembly would negate the need for tevilah for the entire French press itself [presuming the repair was required before it had been immersed already]. The circumstances seem to imply that this repair is a halachiclly significant act of completing the utensil and as such is is "Jewish made" and requires no immersion. Of course it is clearly a case where a posek should be consulted to judge how significant the assembly is.

(Furthermore, even if the act wasn't significant enough to negate the need for immersion of the French press, it is probable that the shoulder nut alone does not have a status of a utensil until it has been added to the French press, which we have noted is done by a Jew in our case so no tevillah is required because they are the one who "made" it).

An alternative option is for a Jew to take apart the appliance and re-assemble it.

Firstly, an appliance made by a Jew doesn't need to be dunked in a mikva. If you can "break" and then "fix" the appliance yourself, that works. (What's called "breaking" and "fixing"?)

Not the answer you're looking for? Browse other questions tagged halacha tevilas-keilim-dipping food .

9
Does a coffee grinder require Tevillah (immersion) in a Mikvah?
1
Does Bishul Akum require intent?
3
Does salad require al netilat yadayim?
3
Does porcelain require immersion in the mikvah?
5
Is it permissible to use a French Press on Yom Tov?
2
Does an unknown Ikkur require a blessing?
0
When does a keli not require immersion?
10
Does Sour Beer Require Certification?
2
Does a table require tevila?
7
Does a wine bottle stopper require tevillah?