In 1993 Rabbi Mordechai Willig, a Rosh Yeshiva at YU and a member of the Beth Din of America, drafted a prenup for use at Jewish weddings to avoid future Aguna/Mesorevet Get problems. The agreement basically obligates the husband to pay a fixed sum of money to the wife as support upon receiving notice from her requesting it. This is intended to be used by the wife to encourage the giving of a get.

Much more information is available at their website: http://www.theprenup.org/

If this is indeed permissible, it sounds like a good idea to me.

Do some current Rabbis/groups find this agreement to be problematic? If so, why? Is there a different variation they would find acceptable?

See the Fall 2010 issue of Tradition, with the article entitled "A Marital Agreement to Mediate" by R. David Joseph Mescheloff and also the letters section of the Spring 2011 issue, with letters by R. Howard Jachter and the author. The dispute is whether R. Moshe Feinstein and R. Soloveitchik supported the use of prenuptial agreements (according to R. Mescheloff, they both opposed them). It also seems that some of the rabbis on the list cited in the question subsequently withdrew their support (specifically R. Zalman Nechemiah Goldberg).

Many of the standard objections to prenups fall along the lines of the statement from R. Shaul Yisraeli quoted in the article:

...R. Shaul Yisraeli protested vigorously against prenuptial agreements: “All sorts of contractual arrangements whose purpose is not the financial undertaking [itself], but rather the pressure and the coercion applied to the husband, due to the payments, so that he will agree to divorce—all of these are a waste of effort, for all agree that the law of an [illegitimately] coerced get applies to this [i.e., a get delivered on account of such pressure]”...

Thirty two years ago I gathered material for an article I never brought myself to write. The RCA had not yet endorsed pre-nuptual agreements that require mandatory arbitration through a bais din and, in fact, were on the record opposing such agreements. In 1954, following the drafting of such an agreement by Conservative Rabbi Saul Lieberman, the RCA went on attack with a halachic criticism by Rabbi Norman Lamm ("Recent Additions to the Ketubah -- a Halachic Critique," 2(1) Tradition 93 (1959)), and on the legal side with a monograph by my friend Prof. A. Leo Levin and Meyer Kramer ("New Provisions in the Ketubah -- a Legal Opinion," 1955). Positions were dramatically altered by 1982, when Orthodoxy's super-lawyer, Nat Lewin, was litigating Avitzur v. Avitzur, which in 1983 resulted in a famous decision by the New York Court of Appeals (NY's highest court), favoring manditory arbitration. From what I understand, all RCA rabbis require such a pre-nuptual agreement. My daughter was married by a well-known Young Israel rabbi who did not require the pre-nup (nor even mentioned it). For more information, see Rabbi Michael Broyde's interesting article at http://www.mishpat.ac.il/files/650/3610/3622/3623.pdf

I am aware of two lines of reasoning given for objecting. One applies specifically to the pre-nup version, which is signed, or at least agreed to, before the marriage has been performed.

The first, which I have heard quoted in the name of the Chazon Ish, is a more technical halachic argument. The objection is that such an arrangement is tantamount to mesiras moda'ah on the kiddushin, essentially a statement by the bride-to-be that she does not agree to be bound to this marriage, and is therefore insisting to have a back-door way out.

The second, which I heard from Rabbi Dovid Orlofsky, is more of a hashkafic point. The objection is that, halachically valid or not, a pre-nup, or post-nup for that matter, undermines the model of a marriage. The Torah designed marriage in such a way that the husband is responsible for, and in control, of the relationship. (In the presentation, Rabbi Orlofsky explained why that would be the desired nature of the relationship, but that's beyond the scope of this discussion.) Anything which unbalances that relationship is essentially ripping the guts out of Jewish marriage.

According to Rabbi Daniel Eidensohn a number of Rabbis oppose the idea of a halachic prenup on the grounds that any get given as a result has the status of a get me'usa (forced) and is therefore invalid. 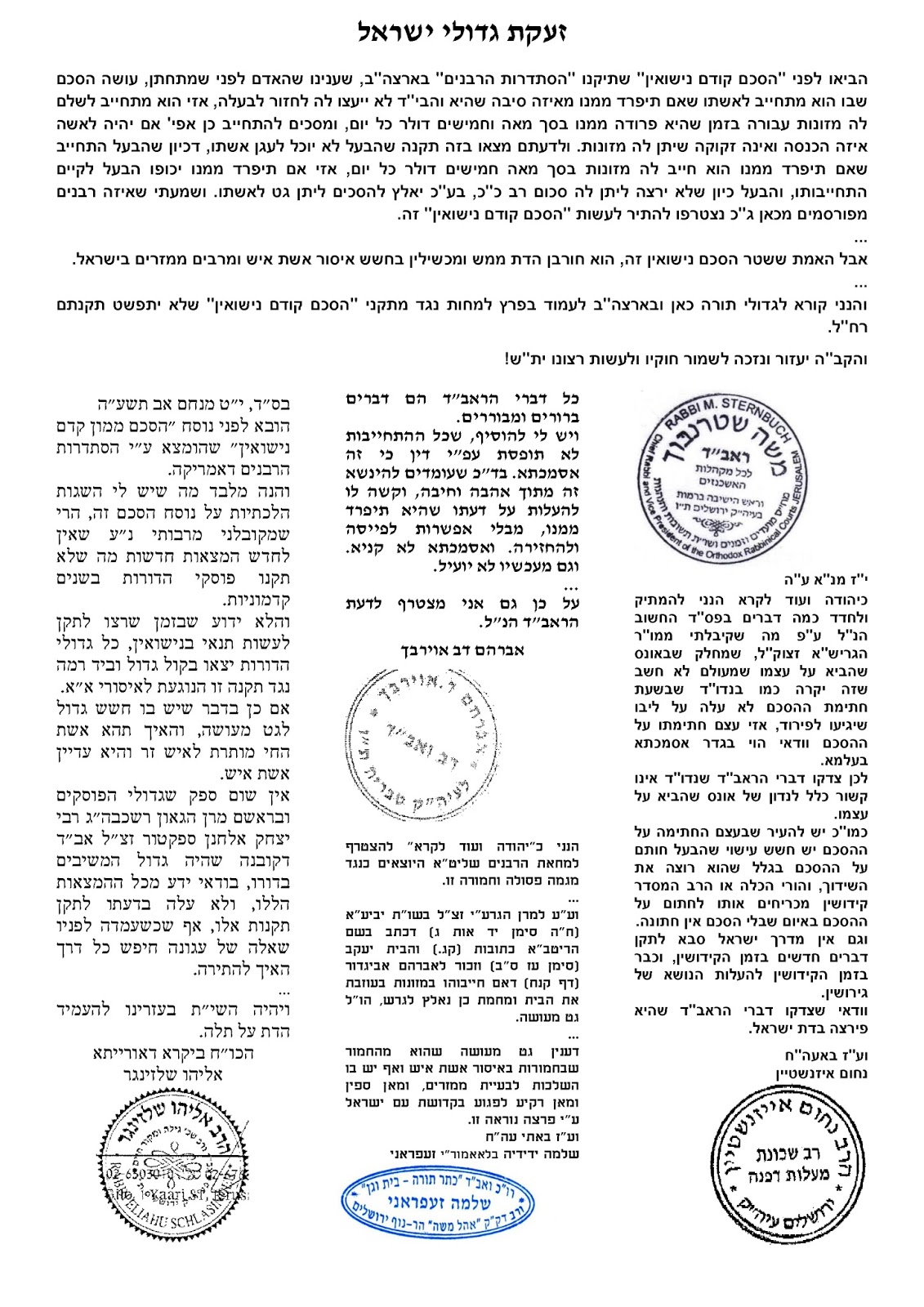 See also the results of a search on his site for the term prenup. It is not clear if there are other variations which these Rabbis would find acceptable

Not the answer you're looking for? Browse other questions tagged halacha marriage divorce legal-documents bein-adam-lachavero .

18
What is Ya'aleh Veyavo about?
8
How do those rabbis opposed to the RCA (“Rabbi Willig's”) prenup feel about the Nachlas Shiva document?
7
Kiddushin 'Al Tnai and the effect of Nissuin
0
Which rabbinic or halakhic relief is offered to agunot?