Both end the same, but are pronounced differently. (This was from a text purporting to teach "Biblical Hebrew, meaning as it was pronounced in ancient times").

Is there a rule I am missing? Seems strange, as the orthography is exact for the pair. I'd like to understand the rules for how to pronounce this form in general so that I can pronounce the words correctly when studying the Bible in Hebrew.

EDIT: I would like to thank Dave for pointing out later on in the book the author completely contradicts her original phonetic rendering and spells all of the duals with the YIM ending.

The rule is as stated by others in the comments, that the Yud is part of the ending. As such, if breaking it up into parts, it would be most correct to portray the visualization of it as Ya-DA-Yim, as described by @Double AA.

However, I believe it is incorrect to deliberately pronounce it that way - and by that I mean pronouncing it with deliberate emphasis on each of the syllables.

There should, in my opinion, be a diphthong when it is pronounced audibly, much like this*:

My view on this is shaped by some limited experience studying Semitic languages on the academic level. I am far from an expert, but I believe the Hebrew language, much like its sister languages, has a natural fluidity when pronounced, unlike Germanic languages (like English), which have more rigid stops. To be fair, Hebrew does have stops, and the Ba'alei Mesorah have encoded for us certain forced stops in certain syllables, but I believe this is proof of the natural inclination of Hebrew to follow this pattern: that is, the fact that we have certain places where rigidity is enforced shows that the language has a natural fluidity to it.

I cannot speak for the author of the book you have studied, nor for other (more professional) opinions on the matter, but in most cases, especially as a student, when I have asked more advanced experts (both academic and religious, most times overlapping) on similar subjects, I've been pushed in the direction of allowing fluidity, rather than rigidity, in the pronunciation of Hebrew.

EDIT:
*Unfortunately, I cannot recall from what text I took this.

The difference of the plural ending is due to the dual form, which "adds" a syllable in the plural form in both modern and Biblical Hebrew. Thus nouns such as hands, ears, etc., have a dual form, since they are things that occur in pairs. In regard to Biblical Hebrew, Waltke and O'Connor (1990) note the following. Please note the last paragraph at the bottom, which describes the Hebrew words מַ֫יִם ‘water’ and שָׁמַ֫יִם ‘heavens’. 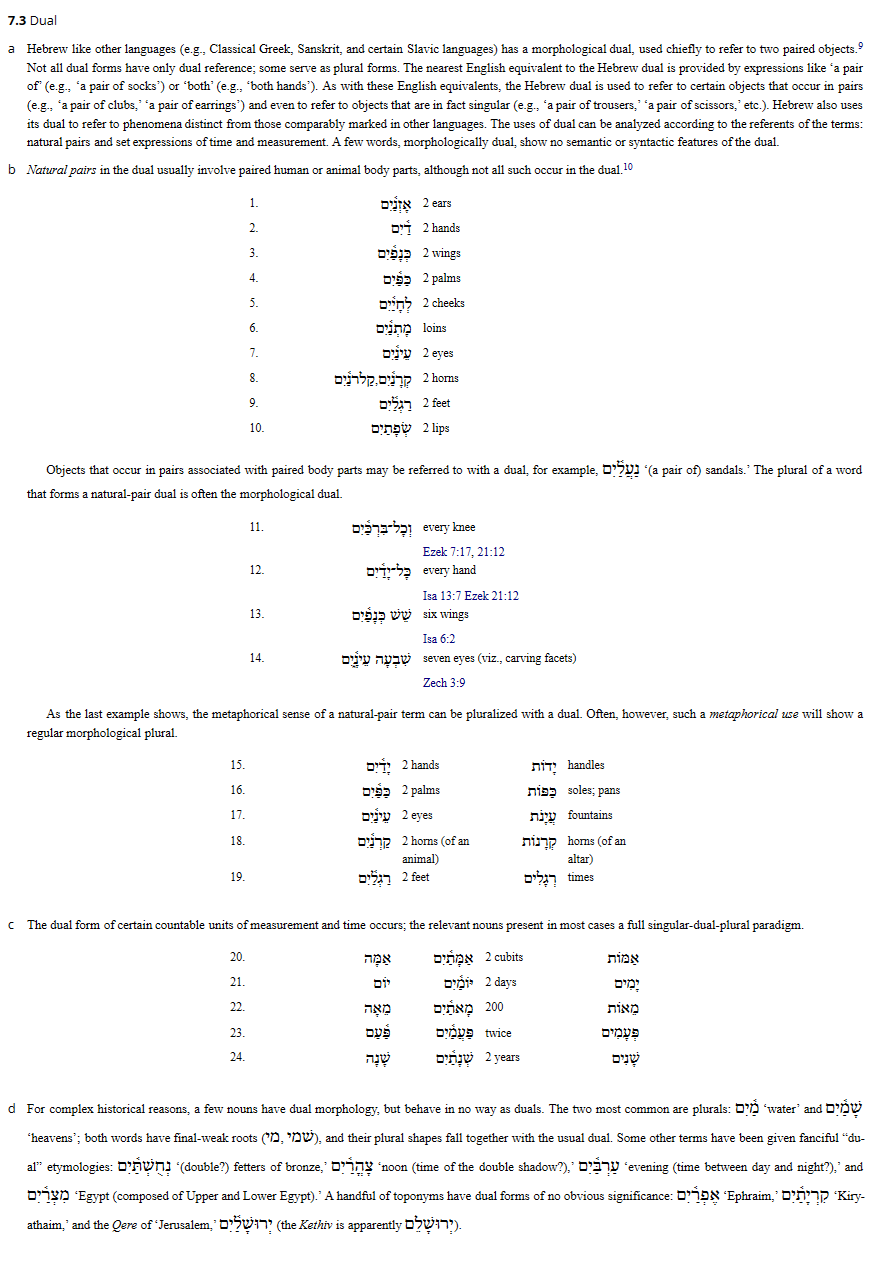 Finally, one may ask why the word Jerusalem (יָרוּשָׁלַ֫םִ) appears in the dual form in the Hebrew language when the word is a singular noun. In this regard, the same source indicates that there are complex morphological reasons as noted in the following:

1
What is the vowel associated with the letter “dalet” in the name “Aleph-Dalet-Nun-Yud”?
18
Aleph with a Dagesh
8
How does one read words with a "yud" in Targum?
2
Articulation of resh with dagesh
1
How does "Israel" mean to struggle with G-d?
1
Help with two Yehudah Ya'aleh responsa
2
Is וּכְתַבְתָּ֛ם in Shema with Shva Na or Shva Nach
1
Kamatz with yod in פָּנָיו?
2
How to pronounce Hebrew with the Chassidic pronunciation?