What is the source of the Birkat Habayit?

What is the source of the text of the Birkat Habayit: 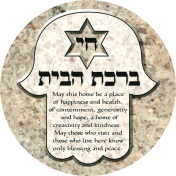 May this house be a place of happiness and health, of contentment, generosity and hope, a home of creativity and kindness.
May those who visit and those who live here know only blessing and peace.

I've seen them written on a hand, and some come with garlic, multi-colored beads, and some other strange objects.

It is anonymous in a modern hebrew, here is a document in pdf of Rabbi Ari Zivotofsky:

Over the last few decades, the so-called Birchat Habayit has found its way into many Jewish homes. Its words even have been used as a popular song on a recent Jewish album. This “prayer” seems to be a relatively recent phenomenon. The language and style are modern Hebrew, indicating a recent composition. Rabbi Shlomo Aviner,8 the rav of Beit El, has pointed out that the style is not a Jewish style. There is no “Yehi ratzon” or “Ribon Olamim.” God is not addressed and no request is made.

It is simply a statement. Rabbi Aviner is sure it is a translation from a non-Jewish source, and recalls a claim that the contents may be from a work by Rudyard Kipling. I have been unable to locate any such formulation in the writings of Kipling. Other scholars speculate that it is modern Hebrew poetry.

Not the answer you're looking for? Browse other questions tagged sources-mekorot blessing home-house .

8
What are the halachot of Chanukat Habayit?
0
Correct voweling of Birkat Hamazon
2
What is the halachic definition of "tzurat hapat" in terms of requiring birkat hamotzi?
0
Wrong accent/dagesh on birkat ha-Torah?
6
What is the source of this text?