What is the source that Parshas Parah is from the Torah?

I have read in many places that Parah could be a biblical requirement to read.

Why is that? Zachor makes sense (as it says so in the Torah here). Why Parah?

The Beit Yosef in OC 685 quotes Tosfot who says that Parashiyot Zachor and Parah are Biblical requirements. However, our versions of Tosfot do not have anywhere that Parah is Biblical. The Mishna Berura OC 685 sk 15 writes that most Achronim agree that Parah is not a Biblical requirement. So we really don't know what source Tosfot had in mind (assuming the Beit Yosef's version didn't have a scribal error, which is possible).

EDIT: The Aruch HaShulchan (OC 685:7) suggests the following possibility for the source. In Parashat Parah the pasuk says (Numbers 19:10):

וְהָיְתָה לִבְנֵי יִשְׂרָאֵל וְלַגֵּר הַגָּר בְּתוֹכָם לְחֻקַּת עוֹלָם
...and it shall be unto the children of Israel, and unto the stranger that sojourneth among them, for a statute for ever.

The sifra derives from here that the ashes remain effective even nowadays without the Temple. However, later on the pasuk repeats (Numbers 19:21):

וְהָיְתָה לָהֶם לְחֻקַּת עוֹלָם
And it shall be a perpetual statute unto them.

The Aruch HaShulchan posits that this extra occurrence of the phrase comes to teach that one should be involved even without the ashes by learning these verses which we do by reading them publicly once a year.

Again, this is all speculation because we don't have an original derivation (as I explained above).

The Chazon Ish and/or Steipler Rav suggests that the obligation may stem from an interpretation of Vayikra 15:31 as a general instruction to the leadership to warn the nation about the rules of tum'a, which we deliberately accomplish once yearly by the public reading of Para.

I think that Tosfos in Berachos 13a is the source for where the idea of Parshas Parah being d'oraisa stemmed from.

If you look at the Tosfos below, you'll see that Tosfos lists the Torah portions that are d'oraisa, and only Parshas Zachor is mentioned: 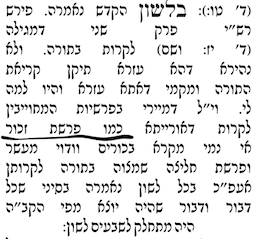 However, earlier printed versions of Maseches Berachos have this same Tosfos who mentions Parshas Zachor AND Parshas Para: 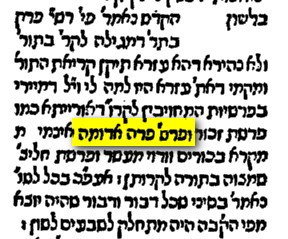 I remember learning that this is the source for where the confusion stemmed from- ie whether Tosfos actually meant it, or whether it may have been a printer's error etc.

15
Where Rashi uses a Russian word in Nach?
4
Chazzon Ish and Parshas Parah being D'Oraisa

4
Chazzon Ish and Parshas Parah being D'Oraisa
17
Why was the parah aduma found in 2002 disqualified?
1
Is there some source that explains the configuration of reading the 4 parshiot?
15
What is the source that forbids indecent dress by women?
12
Where did the first parah adumah come from?
3
Why was it so important that the Kohen preparing the Parah Adumah be a tevul yom?
4
The amount of Parah Adumah ashes and water ("mei chatas") required to purify a person
1
Parah Adumah water: different names used in the Torah ("mei niddah") and Chazal ("mei chatas")