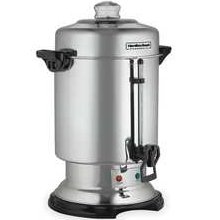 because the outside water tube gets cold over Shabbos but then gets reheated in the cup. Both sides agree that "Yesh bishul achar bishul" (there is cooking after cooking).

What is the argument? It seems to be a machlokes b'mtzius (an argument over a fact).

Rav Yechiel Perr told me that that after speaking to scientists he concluded that to use such an urn is not a problem as the water in the tube has already exchanged from the water inside.

Rav Ben Zion Abba Shaul in Shu"t Ohr Letzion (Chelek 2 Perek 30 note 10) rules that even according to those that hold yesh bishul achar bishul this urn us not problematic.

This is not to be relied upon for practical halacha CYLOR

As Rabbi Willig explained it, one factor would be whether or not we are concerned with heating more water already above yad soledet bo. Another is if this water's temperature is in fact below that (say this water is at 140 F...is that above or below). There may well be other factors. Tipping the urn backwards before Shabbat to ensure all water is pre-boiled seemingly does help, and was in fact his advice in this case.

R. Ovadiah Yosef (Hazon Ovadiah Shabbat vol. 4, 414ff.) rules on this exact type of urn that it is permissible to use.

In presenting the question, he discusses various issues at play that are debatable:

R. Yosef also cites R. SZ Auerbach (Minhat Shlomo vol. 2 §34:23) who, in agreement with the first two issues and R. Yosef's position, writes that after investigation found the water in the tube to be almost the same temperature as the water in the vessel and therefore does not present any problem of being re-cooked.

15
Brewing fresh coffee for Shabbos with a time clock