Why are some royal mothers omitted from scripture?

The Books of Kings were written from the standpoint of Judah, not (northern) Israel. For these writers, the non-Davidic kings were not so important lineage-wise, because G-d had not promised these kings that their royal lineage would be unbroken. To quote Psalm 132:

Also, whether the authors thought of the non-Davidic kings as legitimate or not, the details of these kings' lineages were not as well known to these writers, who were, themselves, citizens of the Kingdom of Judah. Indeed, the book directly refers the reader elsewhere for additional information. So we see, for example, in the case of King Ahab:

Now the rest of the acts of Ahab, and all that he did, and the ivory house which he built, and all the cities that he built, are they not written in the Book of the Chronicles of the Kings of Israel?

There are at least 17 instances in the Books of Kings, in which the reader is referred to the "Chronicles of the Kings of Israel" for additional information about the non-Davidic king whose reign has just been summarized. It may well be that the names of the northern kings' mothers were listed there.

The simplest answer to the OP question is thus that the authors of the Books of Kings generally provided much less information about the kings of Israel than about the kings of Judah. The lineages of the latter were more important because of God's promise to David. Also, additional information was thought to be available to the reader in the Chronicles of the Kings of Israel.

The solution to this problem lies with Maacah daughter of Abishalom. Maacah serves as 'king's mother' first for her son Abijah of Judah and then for her grandson Asa of Judah. When Maacah strayed after idolatry, Asa removed her from her office (Kings 1.15.13). The prophet never tells us what office she occupied, but the most obvious option is the office of royal mother. Because royal mother was an office and not a biological status, Maacah could both occupy the office of royal mother for her grandson and subsequently be removed from that office even though it is obviously impossible to 'unmother' someone. Once we accept that royal mother was an office and not a biological relationship, we can further suppose that this office only existed in the Davidic kingdom from Solomon's reign on and that this office was vacant for two of the Davidic kings (Jehoram and Ahaz). This vacancy can be understood as occurring when there was no appropriate matriarch available due to death, misconduct or illness.

In David's time the office had not been established yet. We might speculate that it was created by Solomon in recognition of Bathsheba's efforts to prevent succession controversy. Perhaps the prophet hints at the creation of a new office when he says about Solomon וישם כסא לאם המלך (Kings 1.2.19).

An answer is offered that the Ramban writes:

That it's the norm to mention the the names of mothers of kings (seemingly out of honor to the king).

The author of that blog posits that the Ramban's position is that non-Davidic kings don't have a real status of kings and therefore the name of the mother doesn't get mentioned.

As an aside, the following image which lists all the occurrences of the phrase "ושם אמו" in Tanach. 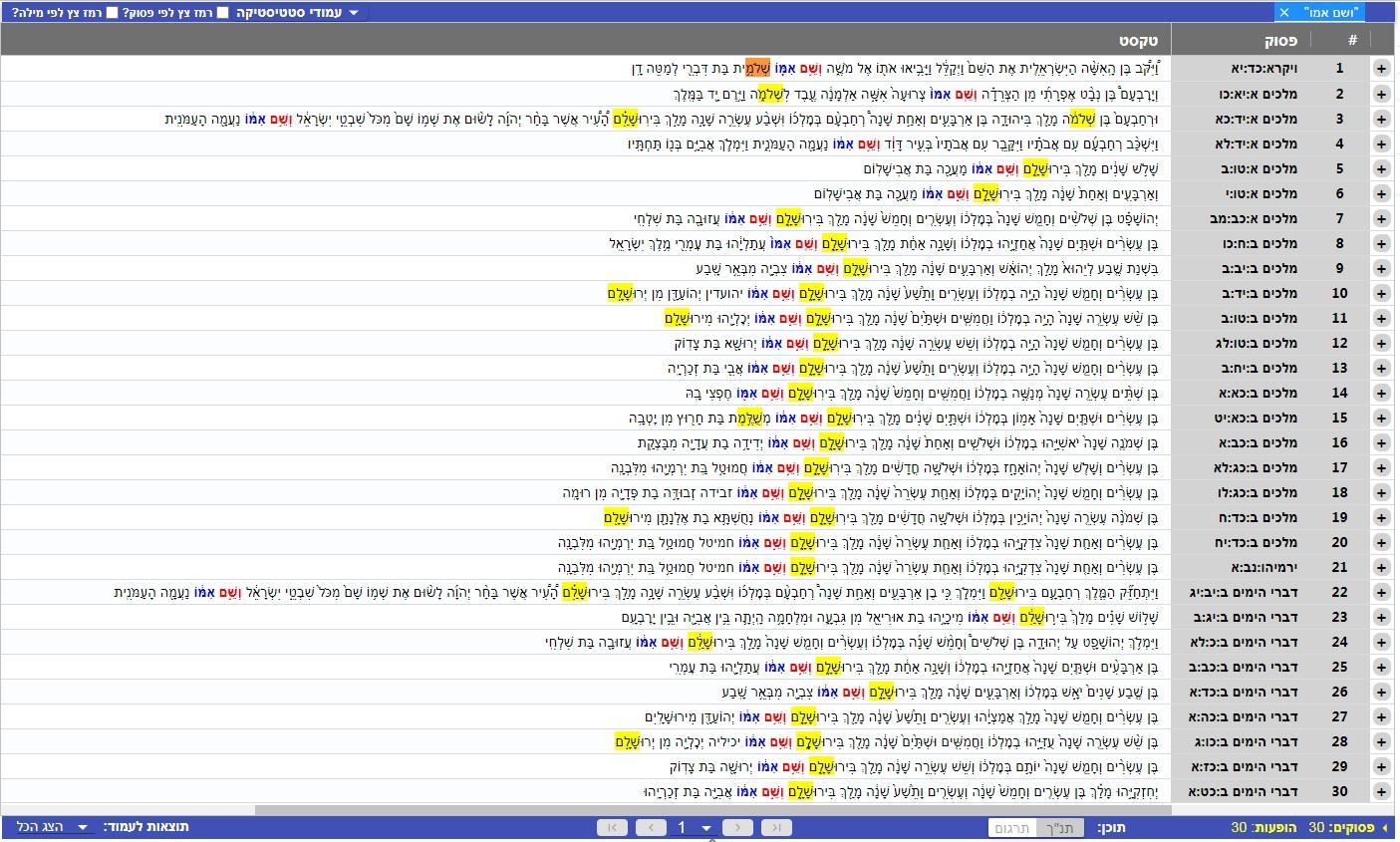 An interesting pattern emerges (that I currently cannot explain) that "שלם" (highlighted) appears adjacent (or at least near) the phrase "ושם אמו". The "שלם" appears within Shlomis bas Divri and Shlomo haMelech and Yerushalayim. This pattern appears in all but one occurrence. That occurrence happens to be with Na'ama, the mother of Rechavam who, as can be seen, is already mentioned several pesukim earlier.

5
Idolatrous Courts of Judah's Kings
3
On the day when the Mashiach is finally revealed, how are we supposed to determine they truly come from the Davidic Line?
12
Why did the Davidic dynasty need to come from questionable relations?