Source for this Vilna Gaon?

With the recent events surrounding Russia and Ukraine, I happened to come across this article:

The worrying escalation in military tension has been cited by scholars as the fulfilment of Vilna Gaon's prophecy made in the 18th century. The cleric - also known as Rabbi Elijah of Vilna - was a leading interpreter of religious texts and one of the most influential Jewish figures since the Middle Ages. He is said to have handed down a prophecy to his son that said: "When you hear that the Russians have captured the city of Crimea, you should know that the times of the Messiah have started, that his steps are being heard. "And when you hear that the Russians have reached the city of Constantinople, you should put on your Shabbat clothes and don't take them off, because it means that the Messiah is about to come any minute."

I am curious where the Vilna Gaon actually says this. Thanks!

As per @robev's point in the comments it is brought down by Rav Moshe Sternbuch in his teshuvos v'hanhagos on Tisha B'Av. 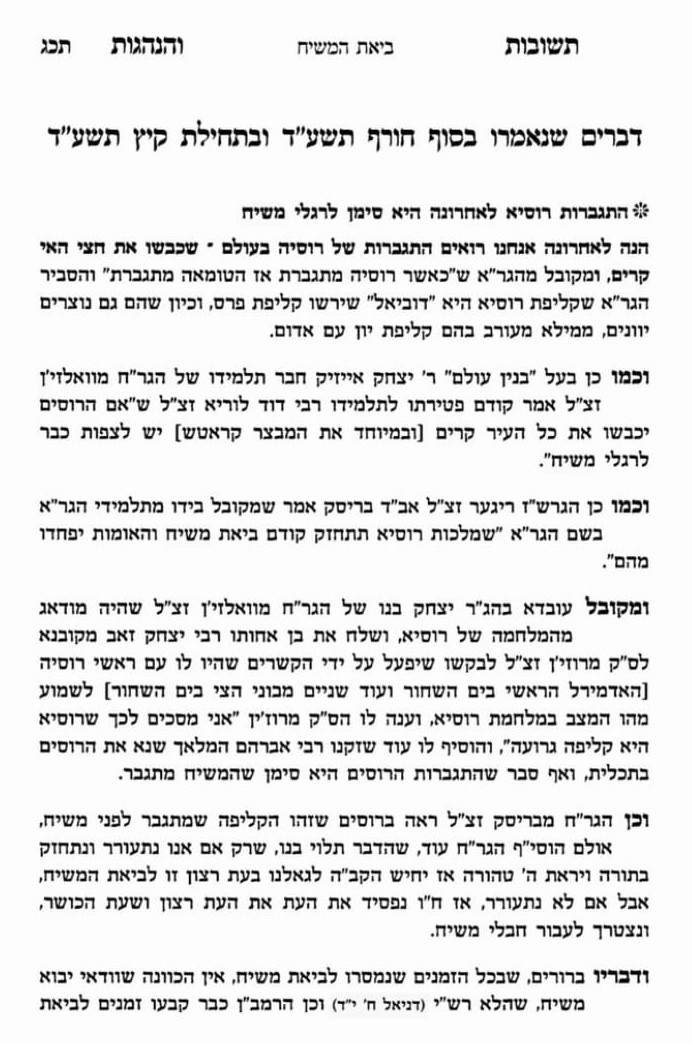 The relevant excerpt mentioning the Vilna Gaon is in the first paragraph and translates as follows:

Behold recently we have seen the might of Russia in the world who conquered half of Crimea. And it is accepted by the Gra (the Vilna Gaon) that, "When Russia become mighty that the impurity becomes mighty/increases." And the Gra reasons the klippah (literally "shell" - see here) of Russia is "Dubiel" (refer to Yoma 77a) that is inherited from the klippa of Persia, and since they are also Greek Christians it comes out that they also have mixed in with them the klippos of both Greece along with Edom.

And similarly, the author of "Binyan Olam", Rav Yitzchak Isaac Chaver a student of Rav Chaim of Volozhin zt"l said before his death to his student Rav Dovid Luria zt"l that, "If Russia conquers all the city of Crimea (and specifically the Kerch fortress) one can already expect the onset of Moshiach.

And likewise, HaGaon Rav Shlomo Zalman Riger zt"l, the av beis din of Brisk said that it is accepted by him from the disciples of the Gra in the name of the Gra that, "The kingdom of Russia will strengthen before the coming of Moshiach and the nations of the world will be scared of them."

And it is an accepted fact that HaGaon Rav Yitzchak the son of Rav Chaim of Volozhin zt"l was worried of war from the Russians and the son of his sister, Rebbe Yitzchak of Kovno, sent to the Saba Kaddisha of Ruzhin zt"l to ask him to act by the ties he had with the heads of Russia (the Chief Admiral in the Black Sea and two other Navy builders in the Black Sea) to listen out for the situation with the war of Russia, and the Saba Kaddisha answered him, "I agree that Russia is a bad klippah" and he added further that his elder, Rebbe Avraham HaMalach completely hated Russia and even held that the increasing might of Russia is a sigh that (the emergence of) Moshiach was getting stronger....

It simply is sensationalism causing students to distort and/or misremember an oral tradition. Here is what they say the Gra actually said (as told by a pretty reliable chain of sources): 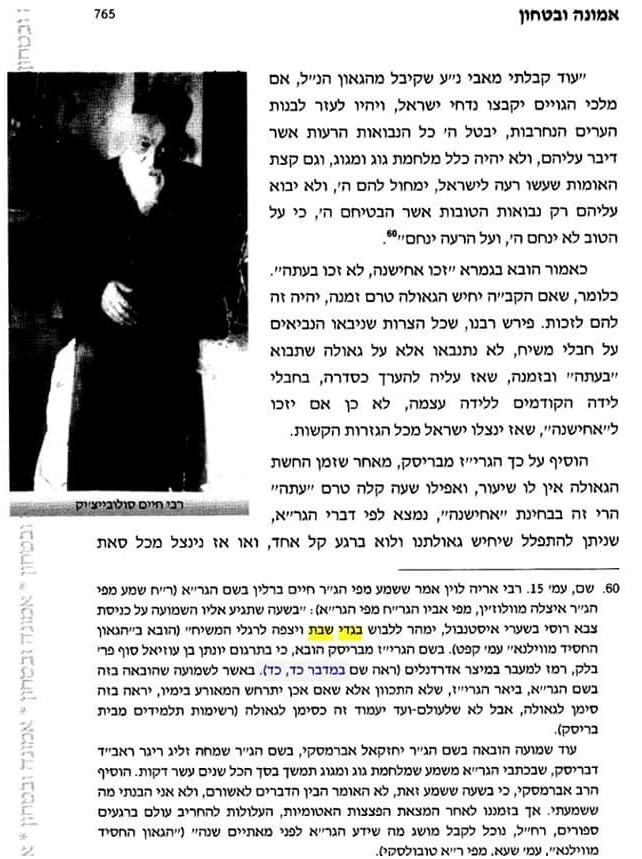 Ibid. pg. 15. Rabbi Arueh Levin [zt"l] said that he hear from the Gaon, Rav Chaim Berlin in the name of the Gra (Rav Chaim heard from the Gaon, R Itzele Volozhiner from his father R Chaim [Volozhiner] from the Gra): "When word reaches him that the Russian army entered the gates of Istanbul, he should rush to put on Shabbos clothes and await the coming of the mashiach." (brought in "Hagaon haChassid miVilna pg 189) It is brought in the name of the Gri"z of Brisk that in Targum Yonasan ben Uzziel, end of the Sedra of Balaq, it hints at the Dardanelles Strait [in Turkey] (see there Bamidbar 24:24). About this report which is brought in the Gra's name, the Gri'z explains that he only intended that if the eventuality would happen in his own days, it would be a sign of the redemption. Not that forever more it would stand as a sign for redemption. (Writings of students from the house of Brisk.)

Another report is brought in the name of the Gaon, Rav Yechezkeil Abromsky in the name of the Gaon Rav Simcha Zelig Riga, the Head of the Beis Din of Brisk that in the Gra's writings it sounds like the war of Gog and Magog will continue altogether for 12 minutes. Rav Abramsky added, but in our day, after the invention of the Atoic Bomb, capable of destroying the world in just a couple of minutes (may His Mercy save us), we can get some idea of what the Gra knew two centuries earili. (HaGaon haChasid miVolozhin, pg. 371, as told by Rav Aharon Tobolofsky.)

It is indeed an oral tradition from the Vilna Gaon.

The Vilna Gaon seems to say this piece of information in Chevlei Mashiach Bizemaneinu, p. 134:

I saw somewhere that this also can be found in the commentary on Yechezkel from Artscroll (The Artscroll Tanach Series, Chapter 38, Mesorah Publications, ltd., pgs. 582-583)

5
What is klipa (kabbala)