Closing an oven door on shabbos

On Shabbos, if an oven contains a pot of fully cooked food, may one open and close the oven door? Two potential issues that I can think of it - 1) similar to the question of opening and closing a refrigerator door, but possibly worse because it is actual aish/havara. 2) potential bishul problems

The Star-K website has a feature on ovens here. It writes there:

As previously noted, aside from the prohibition of cooking on Shabbos, there is a prohibition against initiating a fire or causing increased burning. In the case of thermostatically controlled ovens and warming drawers, opening the oven or warming drawer will cause a mechanism to call for increased burning in order to compensate for the heat lost by opening the door or drawer. The resulting effect is a grama of havara, which is not permissible on Shabbos. However, as discussed earlier, where one does not want or intend for an action to take place and has no need for its result, the initial action is prohibited by rabbinic law only. When coupled with the fact that the ensuing melacha is a reaction that was brought about indirectly, initiated through a grama, there is room for leniency and the initial action is permitted. Therefore, food left in the oven or warming drawer from before Shabbos may be removed on Shabbos despite the fact that this action will eventually cause the oven to burn. This is because removing the food results in additional burning that is not wanted or intended. However, this can be said only when all of the food is removed at one time. If some food remains in the oven to be heated, the additional burning caused by opening the door is viewed as intentional and is, therefore, prohibited. Most warming drawers and ovens are thermostatically controlled and would fall into the above category.

It provides a clear and concise table that illustrates three ways to use an oven on Shabbos if the oven doesn not have an approved 'Sabbath mode'.

(Note: the two columns coloured green are the halachically preferred approach for use of the oven. Discuss the question with you community Rabbi before using approach number 3.) 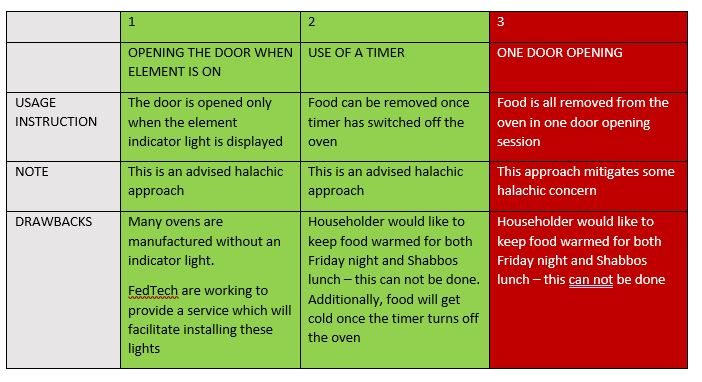 They conclude there with the following breakdown:

Not the answer you're looking for? Browse other questions tagged shabbat melacha-creative-work cooking-bishul appliances .