First archaeological evidence of Crowns on Letters in a written scroll

What is the first archaeological evidence of Crowns on Letters in a written scroll of Torah?

I took a look at the oldest Torah scrolls and didn't see the crowns until the 12th century.

I would say it's probably Wadi Sdeir Genesis (WS-1). According to Dr. Drew Longacre in his essay "Reconsidering the Date of the En-Gedi Leviticus Scroll (EGLev): Exploring the Limitations of the Comparative-Typological Paleographic Method", Textus 27 (emphasis and footnotes mine):

"SdeirGenesis (or Sdeir 1) was claimed1 to have been discovered in an unidentified cave in Wadi Sdeir, where it was apparently finally deposited during the Second Jewish War with Rome (132–135 CE).2 It is paleographically attributable to approximately the late first century CE or early second century.3 The script is an elegant, formal hand, written in neat, straight lines hanging well below the ruled guidelines. The straight but soft strokes betray some minimal (inconsistent) differentiation between thick horizontal and thin vertical strokes, and the relatively thick strokes give the script a somewhat heavy appearance. The vertical strokes generally lean to the left and often end in a sharp tip. The scribe makes regular use of additional ornamental elements and subtle serifs."

I am not an expert on tagin or epigraphy, but I've circled here what I believe was referred to by Dr. Longacre as "subtle serifs": 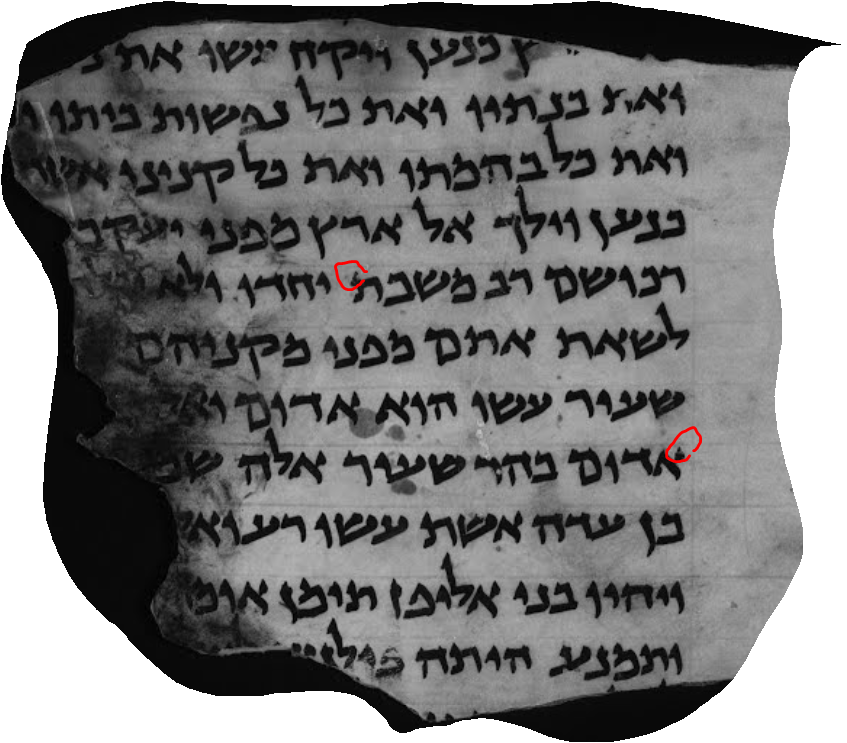 Note that there are two other fragments that can also be viewed in the first link.

Dr. Yosi Baruchi in this essay, pp. 181-182, explains why WS-1 was most likely part of a whole Torah scroll and not a standalone Book of Beresheet.

Side-note: According to Dr. Longacre, there are tagin also in at least one of the Qumran scrolls, the Temple Scroll, as well as in other Bar Kochva scrolls, although these are either not Torah portions or are internally dated (meaning the date is written in the scroll itself) to near the end of the Revolt. Either way, it's interesting that a Torah scroll from around the time of Bar Kochva would feature tagin when considering this tradition about Rabbi Akiva.

1 By the Bedouins who sold it.

3 So at the latest, from the final year of the Revolt (which is typically thought to have ended at 135 CE, but in recent years some scholars have argued that there were still pockets of rebels wandering around Israel in 136, until they were quelled sometime that year (such an argument was made per Chazalic sources by Rabbi Mordechai Hakohen in his essay on Issi ben Yehudah ("תולדות התנא איסי בן יהודה"), which was first published in סיני ל"ד (תשי"ד) and later in his book "אישים ותקופות")), but probably from earlier.

Not the answer you're looking for? Browse other questions tagged history sefer-torah safrus archaeology .

8
Has Paleo Hebrew (Ktav Ivri) Ever Been Found With Crowns?

5
What scribal variations (decorations etc) have changed from the earliest sifrei torah until now?
5
What scribes' Torah scrolls does a non-Orthodox synagogue use?
6
Could a Torah Scroll Be Writtin in Ktav Ivri (Paleo Hebrew)?
5
What is the purpose of the "crowns" on top of the letters (tagin)?
10
When and how did Chet get its STaM easy-to-differentiate-from-Hay form?
4
When the Torah scroll was available at first for Dor Hamidbar?
0
Why is וַיְהִי בִּנְסעַ the minimum Sefer Torah size?