What is a Masora?

What is a Masora and how does it relate to or differ from the Sefer Torah?

I've heard the Masora are notes in the margins of the biblical text, though I haven't been able to find any meaningful explanation online.

A group of scholars well over a thousand years ago wrote down the "mesorah", or tradition, of the vowels/punctuation/cantillation, for both the first five books ("Torah") -- and the complete Jewish Bible (Tanach). Any modern printed Torah and/or Tanach ultimately comes from those. The most famous of them, of course, is the one that was kept in Syria for many centuries, and is known as the "Aleppo Codex."

The scholars who handwrote the vowel-and-punctuation versions left notes in their margins. Some point out relatively simple things, such as "this word is the midpoint of the Torah as counted by words"; occasionally there's a note that while one word is written in the Torah, a different word should be pronounced (e.g. you will hear and another man will sleep with your fiancee, when a much stronger word is actually written in the place of "sleep with"); and many were intended as a form of error checking their work, e.g. "note that this word is written with a funny spelling, and it occurs this way twice elsewhere in the Tanach in the following places."

So today's Torah scrolls don't have any of these marks; you'll see all of them in an original codex; and some of them will appear in a modern printed Tanach, depending on the edition (where computers mean the error-checking notes aren't as necessary).

Here's an example, from the Aleppo Codex near the end of the Book of Ruth: 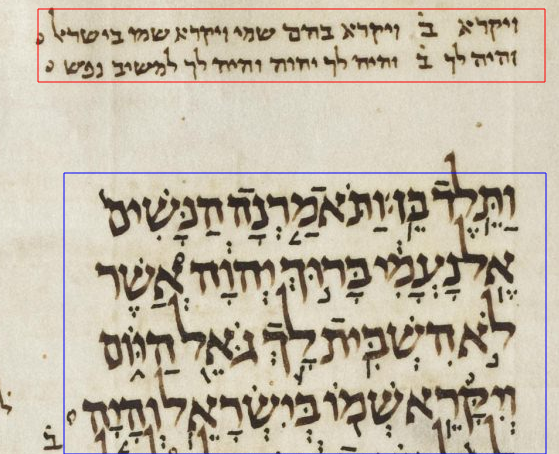 The blue box is the Biblical text, with the vowels and cantillation marks. The "masoretic" notes are above, in the red box. The first references the verse here reads and may his name be called, "ve-yee-ka-rei." The note tells me that the word as vowelized, "and may it be called", occurs only once else, near the end of Genesis. (This is an error check as most other times a word with those letters appear, it is vowelized vayikra -- "and he called.")

Not the answer you're looking for? Browse other questions tagged sefer-torah .

13
What does the /shin/ marker (like Petucha/Setuma) at the end of Torah books mean?
7
Correct way to deal with a damaged mini-torah?
2
Writing Sefer Torah for Melech (King)
3
What factors might allow a shul not to repair a passul Sefer Torah?
1
Is there any particular standard recension/variation of the masoretic tradition that scribes use for torah scrolls in shul?
5
closing ark before gadlu, weekday Torah service