The meaning of Yaldah [closed]

Ask Question
Asked 23 days ago
Active 21 days ago
Viewed 106 times
-1
Closed. This question is off-topic. It is not currently accepting answers.

There are several terms in the bible that indicate "children": zehrah, bakar, yanek, gamul, taph, 'owlel, elem, naar, yathowm, etc. Does the term "Yaldah" in the bible mean child (minor) or girl? It is used only three times in the bible and according to "Gesenius' Hebrew-Chaldee Lexicon" the meaning is as follows:

According to the Jastrow dictionary, Yaldah means "child" only in rabbinic literature, and not in the Bible. 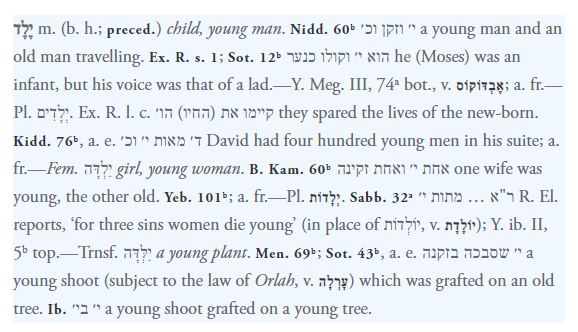 Does the meaning of Yaldah in Biblical usage mean child? What do you think about it?

This question is predicated on a misunderstanding of the way that Jastrow's dictionary is organized. To point out the flaw in the reasoning, in the same entry depicted above, Jastrow writes that "yeled" is a masculine Biblical Hebrew word (for that is what the letters "b.h." mean in the entry) meaning "child, young man" but does not give examples from verses where this is so, such as Genesis 21:14 for the yeled who accompanied Avraham, or Exodus 2:3 when Moshe is placed in the basket on the Nile.

When Jastrow transitions to mentioning that there feminine form is "yaldah", he does not say that this is non-Biblical Hebrew, or Chaldean (that is, Aramaic). He is continuing his earlier explanation, showing the feminine form.

Meanwhile, the claim that "yaldah" means ungendered child is a difficult one to make, and one unlikely that Jastrow would have made. Generally speaking in Hebrew, masculine is the default, and so could be employed for both male and neutral genders. By way of analogy, in English, you would say "actor" and nowadays this could encompass both male and female actors. But, you would never write "actress" to encompass male actors or non-gender specific actors. Jastrow explicitly puts the gender-neutral "child" with the Biblical Hebrew "yeled" at the top of the entry, and does not put it there in the middle for the feminine form. Indeed, he seems to be saying explicitly the opposite of the idea that you are trying to advance and read into his words.

Not the answer you're looking for? Browse other questions tagged hebrew .