Hourly timeline for the Exodus

In order to get an idea of what it was like to have participated in the Exodus, I would like to see an hourly timeline for the process, starting after noon on the 14 Nissan 2448. The timeline should include as a minimum the time that matzos were baked to be eaten with the Korban Pesach, the time of the sacrifice and roasting of the Korban Pesach and the time that matzos were baked before Klal Israel left Egypt in the morning. I would also like to know what did Klal Israel do after eating the Korban Pesach and before leaving.

So far, I have found from Rav Zvi Silber's sefer: 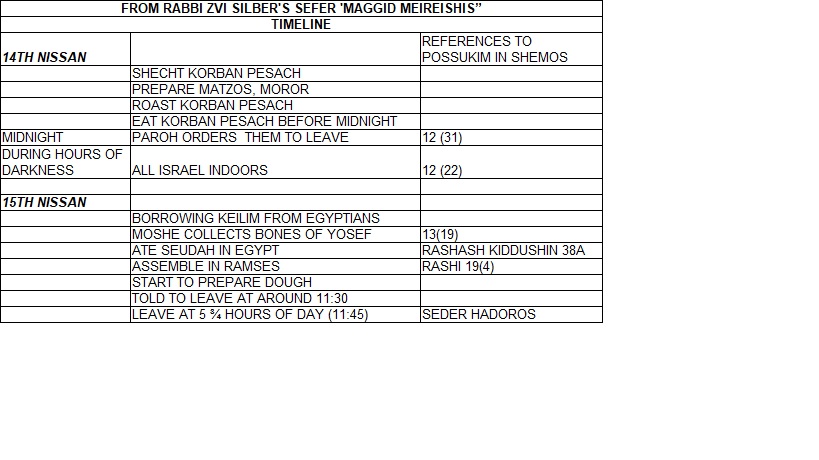 Not the answer you're looking for? Browse other questions tagged history passover time .

5
Saying slichos at any time but "ashmores haboker", should we take out references to the early morning time so we are not "lying"?
4
Checking house for chometz then deciding to not leave
5
Israeli making pizza on last day of Pesach in the Diaspora
8
Why no "Musaf" for Korban Pesach?
1
Why didn't we prepare bread in Mitzrayim the night before?
7
Continuing a meal once chametz is prohibited