Do we withdraw our hands from bread?

The Shulchan Aruch 177:2 rules that one who removes the bread from the table must make a new beracha on whatever he eats for the rest of the meal:

Things that come after the meal before Birchas HaMazon - it was the practice in the times of the Sages of the Gemara that at the end of the meal they would withdraw their hands from the bread, and would remove it, and they would set themselves to eat fruits and to drink - everything that they bring out then, both things that are brought because of the meal and things that are brought not because of the meal, need a beracha both before and after them, because the HaMotzi and Birchas HaMazon only exempt what is eaten during the main meal. This last halacha is not common by us, since we are not accustomed to withdraw our hands from the bread until Birchas HaMazon.

Why is this considered a case that never happens (other that Erev Pesach)? At wedding meals, for example, they usually serve bread at the beginning of the meal, and for the second course there is no bread to be found. Or one who doesn't have a lot of challa, when the bread is finished he continues his meal. And dessert often is served after the table is cleared. Is this just a change in the practice from hundreds of years ago, and we really should apply this halacha, or is there some reason why it doesn't apply to theses cases. 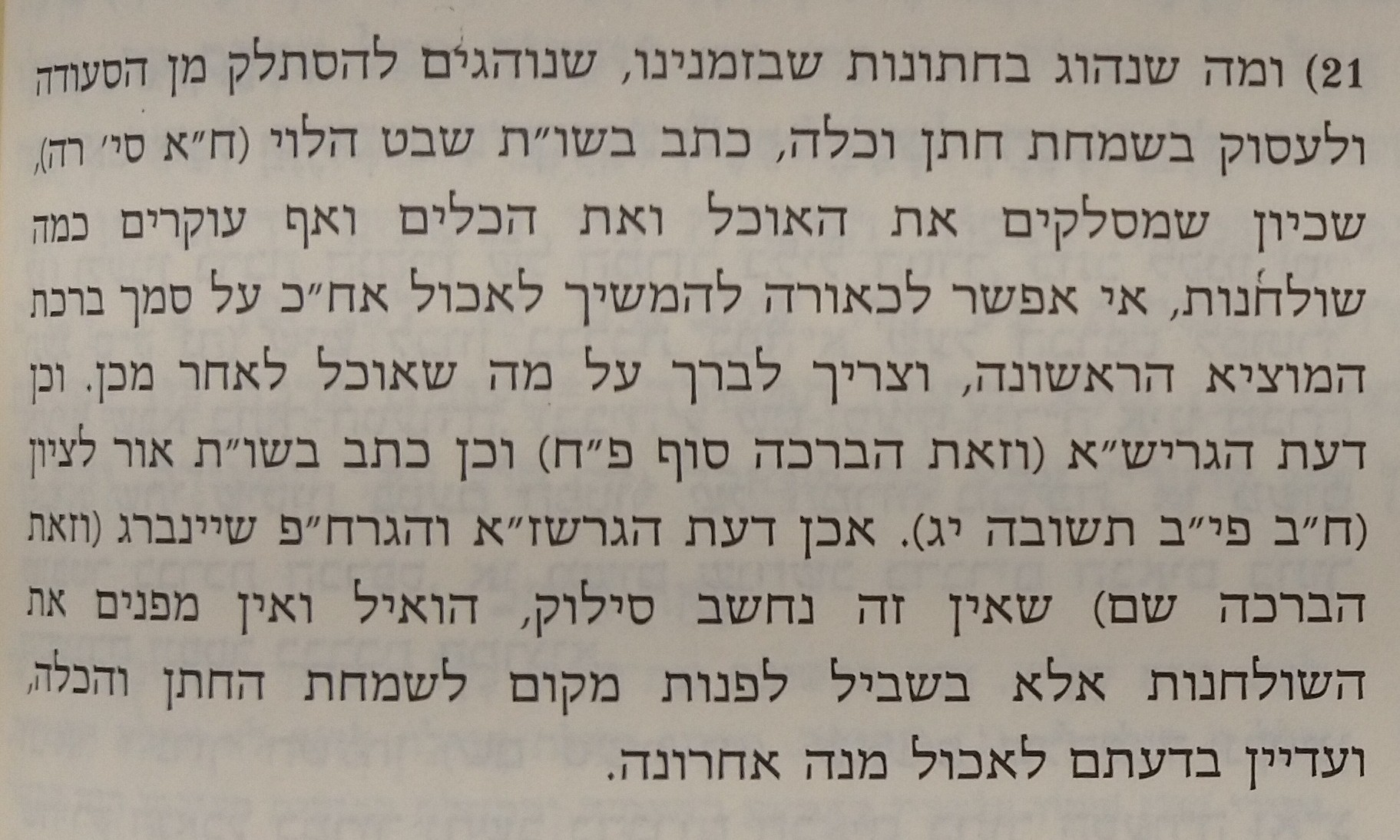 See Biur Halacha on that Shulchan Aruch who discusses the case of large meals where they would clear off the bread from the table and bring out fruit and dessert. He says that this case would depend on one's understanding of which action requires making a new bracha on the food. While some opinions say that removing the bread is enough, many others refer to removing the actual table.

And while he seems to lean towards the commentators who only require removing bread, he doesn't conclude that one should actually make a blessing in such a situation. If anything, he quotes the language of the chayei adam that the minhag is to be lenient. It would seem that he would follow the general rule of "safek brachos le'hakel" (in case of a doubtful need to make a blessing, don't make it.) He actually rules this way later on in the same biur halacha.

Thus, in almost all of our meals nowadays, we generally stay sitting at the table and merely clear off the bread. We don't usually remove the actual tables.

The question comes up regarding weddings, when they do remove the tables after the meal and then, later on during the dancing, bring out desserts. In this case, as mentioned in another answer here, there is a machlokes among contemporary poskim whether to require another brocha or not. (I believe Rav Yisrael Belsky zatza"l also sided that a new bracha was required, in a teshuva printed in Shulchan Levi. I'll add a source when I can verify this.)

Not the answer you're looking for? Browse other questions tagged blessing meal-seudah bread contemporary-halacha .

7
Continuing a meal once chametz is prohibited

12
Mezonos ? Bread
6
Does the blessing for bread cover beverages?
6
Washing for bread with bandages covering the hands
2
wash hands before eating or touching bread
4
Do you make bircat Hamotzi on fried bread?
2
Eating bread/pastries from a non-Jewish baker
0
Do you need to make an additional blessing on yogurt eaten at the end of a bread meal?
2
What to do when uncertain regarding a Bracha on dessert during a bread meal?
4
Bracha on a bread-based dessert
1
What is the blessing on cricket bread?