I noticed that Mesoras Hashas, Oz Vehadar, and Artscroll Gemaras all have a title page where the title of the Masechta and the name of the publisher are placed in a picture of an elaborate archway. There is some variation, but generally speaking the design is consistent. I have also seen this design on other Jewish stationary like teffillin bags. Does anyone know what the origin of this design is? 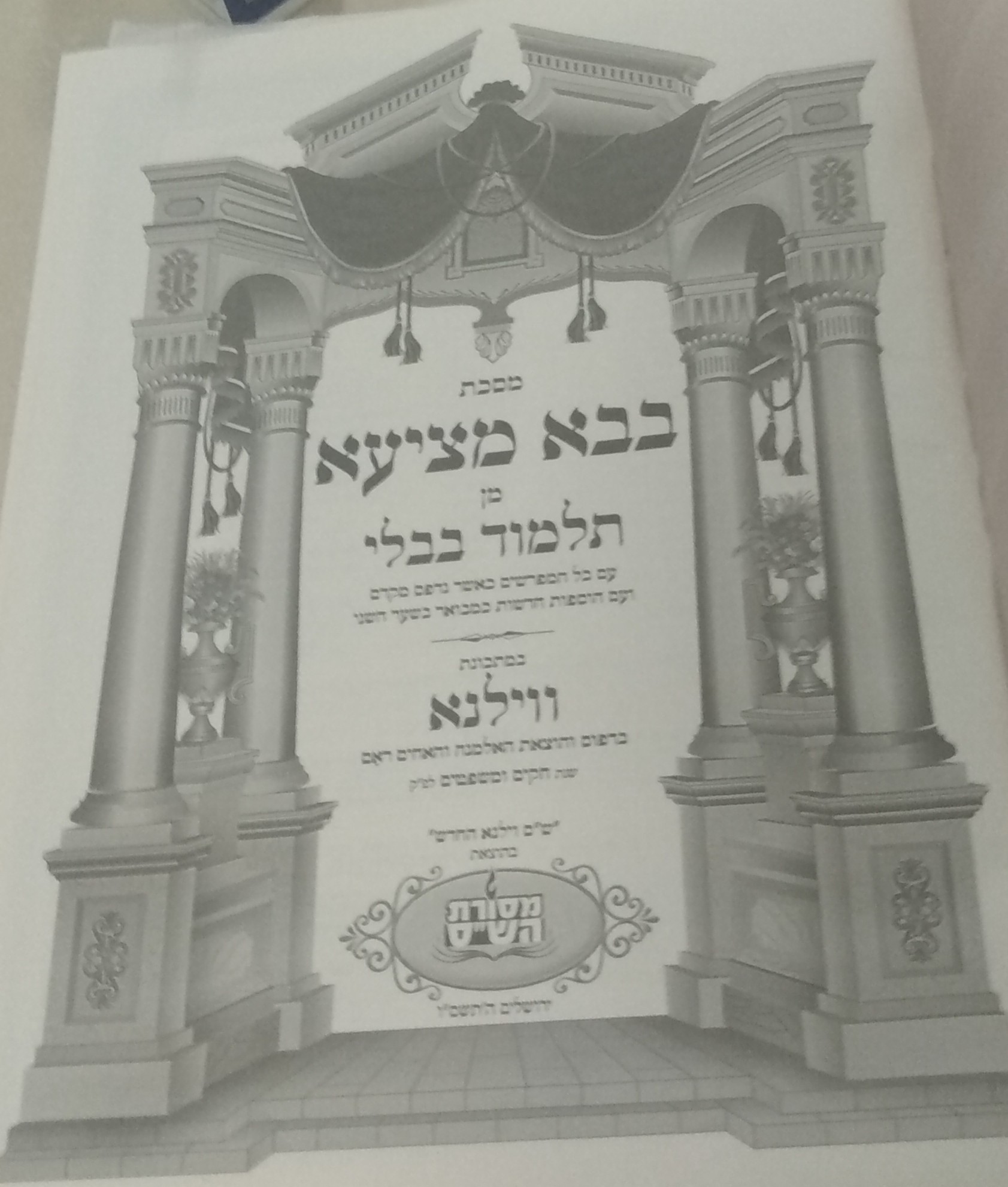 The design is from the gate-page (also known as Daf Shaar or Shaar Blatt) of the Romm Press's famous Shas Vilna: 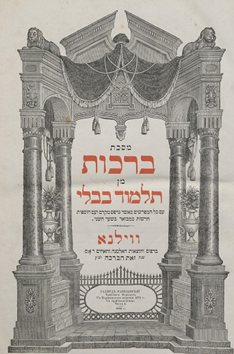 (From an original Vilna Brachot. Source)

The design is sometimes simply known as "the Vilna gate". There's a lot of symbolism in the design. First of all, the entire concept of gate-pages symbolizes inviting the reader to come and enter the world within the book. In this video, it's pointed out that the lion on the left is frowning while the lion on the right is smiling. This symbolizes what happens when you see how much you've studied so far and this makes you happy, but then you see how much you have left, which makes you sad. I personally think that the lions look very human-like, and that they may be caricatures of real people, but couldn't find out who (among those I considered were famous Jews, the owners of the Romm Press and even contemporary world leaders).

Furthermore, in styling, it is very similar to Synagogue arks of the Renaissance and Early Baroque periods, and, l'havdil, also altars in churches of the same periods. For example: 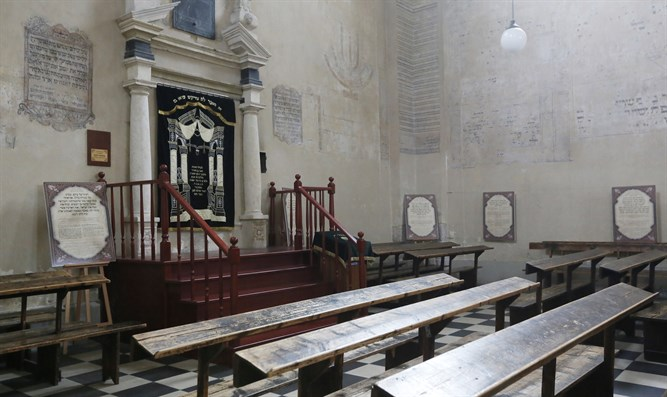 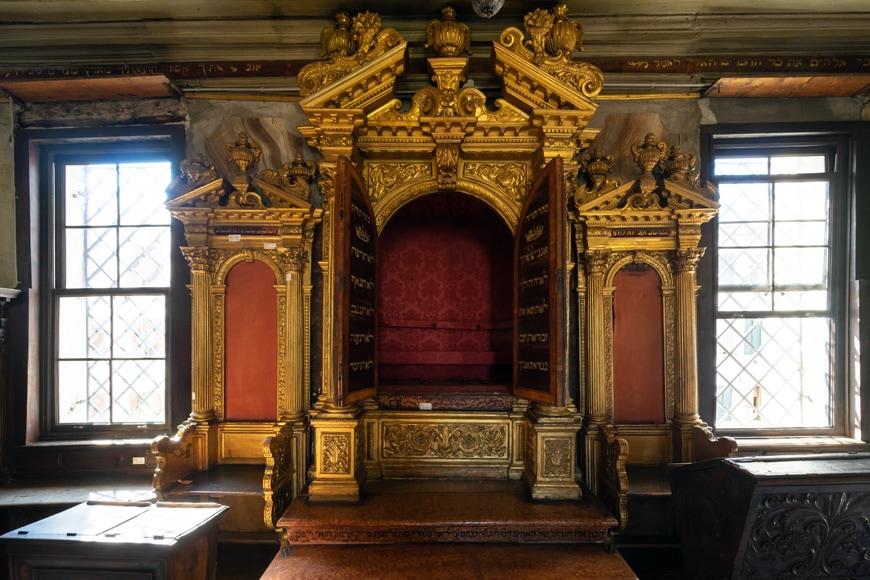 [I think it's preferable I don't post church pictures here, for obvious reasons]

I contacted a number of people in the fields of Jewish history and Jewish art. Unfortunately, it's not currently known who designed this specific gate-page or whether it was based on an older design - from some other book, or some synagogue - or if the general design was an invention of the artist's mind (which is an engraving, by the way, not a drawing).

One art expert from The Association of Jews From Vilna and the Vicinity in Israel told me she doesn't know who made the page, but in styling it looked to her like Venetian Renaissance specifically, and there's a good chance that it was based off of a design that Romm employees found in an old Jewish book in Padua (the Romms sent employees all over to copy manuscripts). Prof. Motti Zelkin of Ben Gurion University, who's considered an expert on the Romm Press and is currently heading a project dedicated to scanning hundreds of Romm documents and organizing them, told me that this story is unlikely. It's possible that the design was found in a book in Rome (Romm employees focused mainly on manuscripts in the Vatican Library (at the end of the Vilna Shas's Niddah, there's an entire description of the making of the Shas. This can be found also in modern editions of the Shas. I recommend checking it out)), but more likely, if it was based on another book, then it was a book already in Vilna.

However, I did manage to find what appear to be three "inscriptions" scrawled onto the lower half of the design:

According to an expert from the Hebrew University's Center for Jewish Art, this inscription reads something like "Bruchocki" or "Bruchoski", with many other illegible letters. Prof. Zelkin informed me that inscription likely reads Baruchocki or Baruchoski, which means "son of Baruch", likely a reference to Baruch Romm, the person who founded the press. He said that it was customary for printers to write their names on the cover pages of books.

At the top-left corner of the "cube" at the base of the column, there's something that vaguely looks like Hebrew letters. It may be a mistake, though. Prof. Zelkin thought it might have been adding by a different worker of the press.

I'm almost certain this reads P.Y.S HOLG, though I've searched top and bottom for who this may be referring to and couldn't find anything.

Prof. Zelkin wrote to me that when the National Library of Israel will re-open, he'll examine the inscriptions I sent to him with proper magnifying devices at the NLI and see what he can come up with.

If anyone knows anything else, I'd be very happy to hear!

Not the answer you're looking for? Browse other questions tagged talmud-gemara .

10
I would like to see an actual Vilna Shas
7
What is the image on many volumes of Shas called?