Picture of the Chacham Tzvi

In the book "Hachassidut" by Rabbi Ahron Marcus there's a drawing of the Chacham Tzvi: 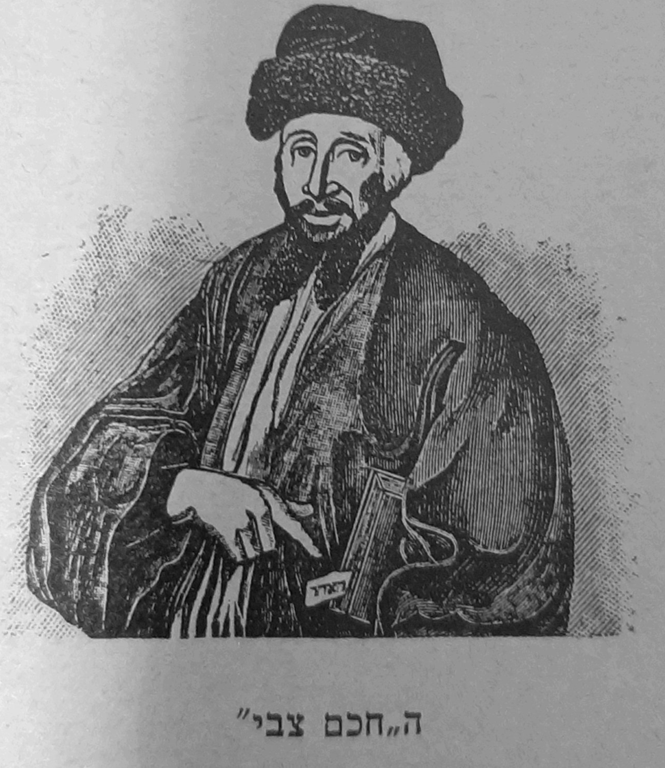 This seems to be based on this painting or this one.

In all three, he's drawn pointing at his bookmark, which, from what I can tell, says "האחר". Does anyone know why this is so?

As Fred mentions in the note, the sketch – which is actually a rough copy of the original painting – actually says "God is one" (יי אחד), not האחר. This is how art historian, Richard I. Cohen, writes about it in his book, Jewish Icons: Art and Society in Modern Europe (p. 115):

In the painting, the Hakham is seen pointing to the words "God is one" written on a slip of paper extending from a book he holds, attesting to his belief in one God and emphasizing his rejection of any other Jewish interpretations, like those of the Sabbateans he diligently fought. Yet the gesture of pointing to a particular text was in keeping with a common tradition in seventeenth-century portraiture, as in the case of the portrait of the Cistercian monk Carlo Giuseppe Imbonati.

R. Yaakov Emden writes the fascinating story about his father's portrait in his autobiography, Megillat Sefer, which helps explain the multiple copies. Here is the translation by S. B. Leperer and M. H. Wise (p. 90–91):

There is another incident I should mention regarding my father's visit to London before his departure for Poland. Because of their abounding esteem and deep affection for my father the lay-leaders of the Sephardim requested that he leave them with a portrait of himself painted in Vermilion. This (they said) would be a fine momento and a token of the abiding esteem in which they held him. Yet however much they urged him he would not hear of it for he, z"l, regarded this as bordering on idolatry. But despite this they were neither silent nor desisted in their efforts. Finally, they succeeded in their endeavors and heartfelt desire by a remarkable ruse, which was carried out by an amazing artist who surreptitiously painted his painted his portrait whilst conversing with him (my father), having set up equipment in another part of the room. My father however, had no notion of this until the painting had been completed and then he discovered a portrait which was the very image of himself. In fact his friends and family found this portrait so remarkable that when I first gazed upon it in London (in later years) I recoiled, for it seemed as if my father was still alive. Copies were made of this portrait and sold at an excessive price, whilst some were available at the London Stock-Exchange.

Not the answer you're looking for? Browse other questions tagged rabbis art .

22
Looking for more information about a story of positive atheism/heresy
5
What was the ultimate fate of Rabbi Elisha ben Abuyah (Acher)?
1
Talmid Chacham today
3
Did the Tannaim act correctly on “Bo BaYom”?
4
Picture by R' Aryeh Kaplan on the front cover of the Aryeh Kaplan Reader
11
Why does Rabba bar Mari in the Talmud quote Ben Sira as a part of “the Writings” when it is not in the Ketuvim section of the Tanakh?
3
Talmid Chacham Standing for Talmid Chacham