Is there teshuva/tikkun for timtum halev (specifically for forbidden foods)? Please cite sources.

Rav Pesach Feinhandler in Avnei Yasfei 3:76 writes that he does not see why teshuva doesn't help. He brings a proof from chelev (forbidden fats) that if one ate cheilev (shogeg) he can bring a korban chatas and the Torah (Vayikra 4:35) already says that one gets a kapparah (atonement). If one can get a kapparah by chelev which has an issur of kares ,then certainly by other machalos assuros which only carry a lav can certainly be atoned for with teshuva.

There is a famous story about Rb Akiva Eiger in which a boy was unable to progress with his learning and it was determined this was because he had eaten non-kosher food at a chasunah (by mistake).

I believe the tikkun recommended by Rb Akiva Eiger was for the boy to go into galus to learn Torah (i.e. to go to a far away yeshiva).

If your question is understood properly, being careful to consume only chalav Yisroel dairy products would be the appropriate response.

Although I don’t have the sources in front of me at the moment to give specific references, this is discussed both in Igrot Moshe (the responsa of Rabbi Moshe Feinstein) and in the Igrot Kodesh of the Lubavitcher Rebbe.

Bli neder, when I have the time and if I remember, I will update this with the appropriate citations.

Anyone having the time and sources, please feel free to drop them into this answer.

In a discourse on Shabbos Shemini 5716, the Lubavitcher Rebbe recommends three different approaches to deal with Timtum Halev (the state of insensitivity in which one’s heart is dull and unresponsive to his contemplation of G-d’s greatness):

Based on this zohar the Rebbe recommends, one should crush and quell the sitra achara within one’s animal soul (located in the left side of one's heart) by humbling his own spirit through intellectual contemplation. This crushing allows the g-dly soul (which is found in the right side of one heart) to break through the blockage in the heart and shine throughout the person. (See chapter 29 of Tanya (another great source on how to get rid of timtum halev) and the quote of the maamar below on many contemplations to break one's spirit.)

Part of the above-quoted discourse: 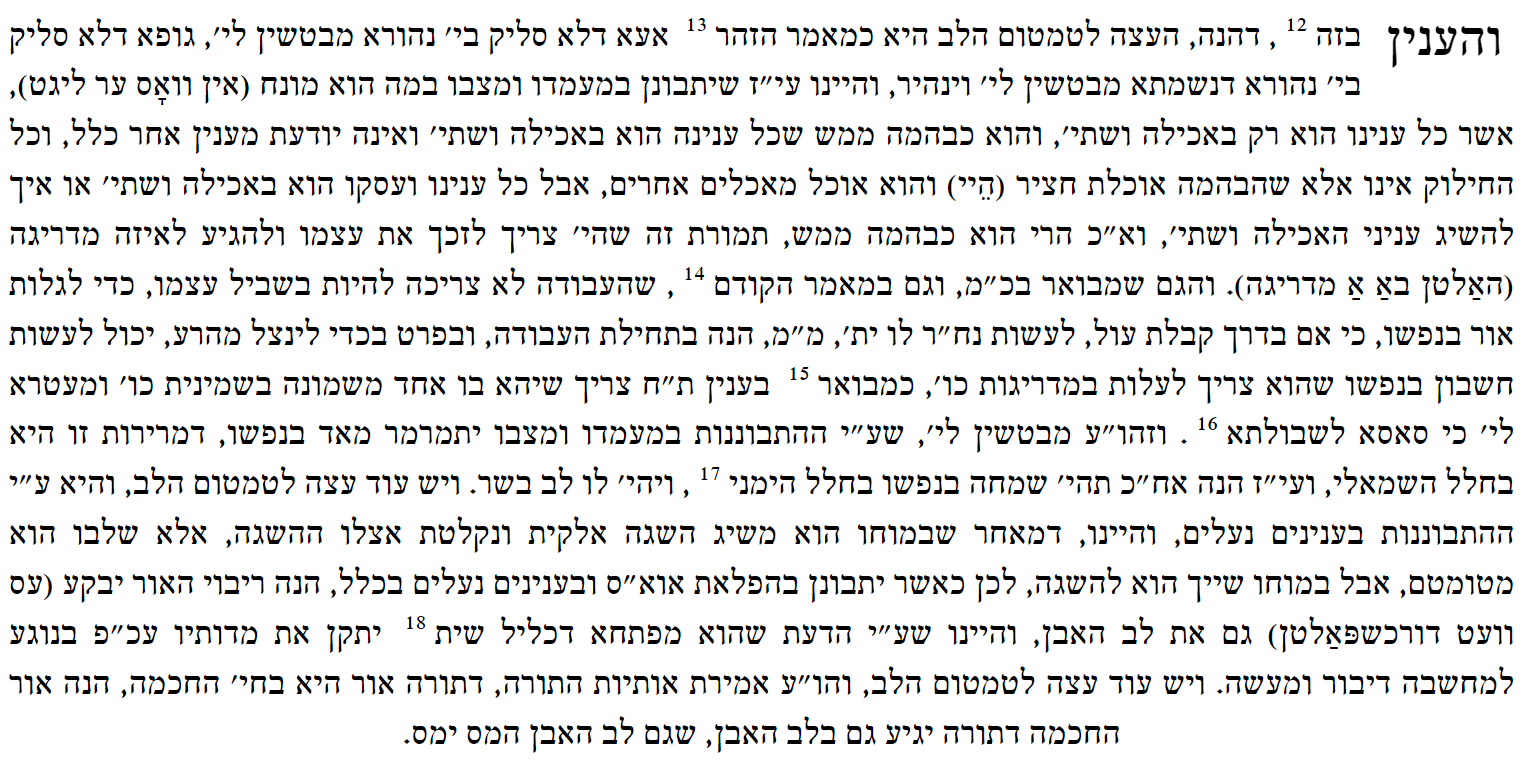 P.S I would also recommend learning more about timtum halev. It is described at length in the sources above and affects people not only eating non-kosher food but also those who do sins in general. (See Yoma 39a: עֲבֵירָה מְטַמְטֶמֶת לִבּוֹ שֶׁל אָדָם)

1
Is contamination from lack of kashrut reversible?
7
Timtum Halev not b'derech achila
3
Why are Tzaddikim protected from improper foods?
3
Source that there's timtum halev on a derabanan

19
What is the meaning of psak?
9
Tikkun Olam source
7
Timtum Halev not b'derech achila
7
Are weekday-afternoon naps permissible?
3
Why is the period of Shovavim connected to tikkun habris?
4
Does every thing need a hechsher?
4
Rambam held of Timtum halev?
1
What is the difference between kosher and permitted food?
4
Should you apologize before Yom Kippur for a wrongdoing that is more than a year old?
3
Source that there's timtum halev on a derabanan