Where do peyos start

so my question is where should the top of the Peyot start.

do they start from the height of where your eyebrows are, top of ear etc.

As a starting point, we need to refer to the Torah injunction brought in Vayikra 19:27 where it says:

The Gemara in Makkos 20a explains what this rounding of the head means:

For rounding the edges of his head, one is liable to receive two sets of lashes, one from here, the hair adjacent to one ear, and one from there, the hair adjacent to the other ear. For marring the edges of his beard there are two edges from here, on one side of his face, and two from there, on the other side, and one from below, on his chin. Rabbi Eliezer says: If he removed the hair on all the edges of his beard in one action, he is liable to receive only one set of lashes for all of them. (Sefaria translation and notation - my emphasis)

Rashi helps further elucidate the stated area by defining it as:

Rav Belsky zt"l in Shulchan HaLevi right at the end in Siman 28 ('בענין שערות הפיאות') p.437 (unfortunately it is not included in the free part of the sefer) quotes Rav Yaakov Kamenetsky zt"l and states that to ascertain the area of the peyos one needs to 'draw' a line between two points. The first point is the intersection of where the hairline that runs horizontally meets with vertical hairline on the side of the head. The second point is the apex of the hairline above the ear. The area below this imaginary line until the bottom of the ear is all part of the peah.

This is more clearly defined here in which there is a link to a pdf here which provides a useful diagram from Rabbi Avi Wiesenfeld shlita: 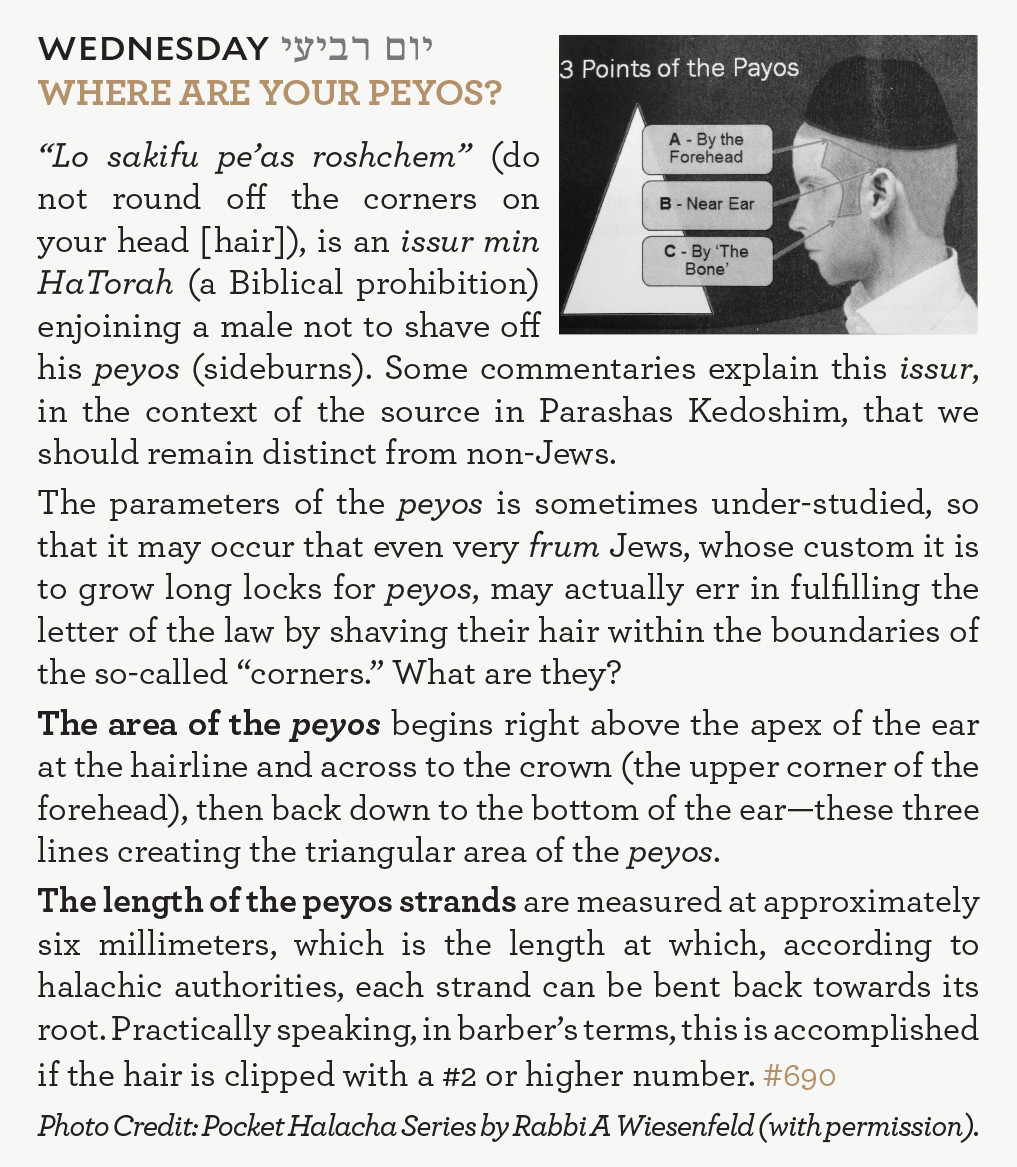 So in answer to your question, the top of the peyos start right above the highest point of the ear at the hairline and stretches across to the upper corner of the forehead.

Not the answer you're looking for? Browse other questions tagged halacha payot-sideburns .

8
Getting a late start on being Maavir Sedra for the year
11
What is the absolute minimum length for peyos?
5
Modifying a Shtender on Shabbos
10
Peyot behind ears?
6
Is there a standard format for the start of each column in writing Sifrei Torah?
1
Are there any sources that prohibit tucking the peyos behind the ears?
1
Is the line for which Peyos begin different for each individual?