What were (some of) the names of the 24 families of Kohanim?

There are a number of sources that list the mishmarot or make mention of them. Some were mentioned in the comments.

As I wrote here, in Yerushalmi Ta'anit 4:2 it says:

R' Zeir' in the name of Rav Hunah "to Hazir 17", that returned the cycle to Elazar.

On which Rabbi Kanievsky wrote:

In other words, in this list, the first eight are descendants of Elazar, the second eight are of Itamar and the last eight are also of Elazar.

From the time of the Second Temple there are three lists in Tanach:

Listed here are only 22 mishmarot.

Again, only 22, but some of the names have changed.

Also only 22, with the some more name-changes.

The reason there are different names in the Second Temple period is because only four Kohen families - Yeda'ayah, Charim, Pashchur, Imer - returned during Shivat Tzion, so as punishment to the other families, the mishmarot were built out of these four families. (Arachin 12b) However, the gemara in Ta'anit 27b says that were one of these other families to return, they would be able to join the workforce, but would be demoted to a different spot on the list (the example brought in the gemara is from Yehoyariv, the first mishmar at the time of the First Temple - they would be demoted to sixth place (the last of Yeda'ayah)).

As for the differences between the lists, the following is from a chart I made (in Hebrew) on figuring out which mishmar is which and out of three lists of 22, what were the full 24. Some of it is my own work and some is based off of Prof. Yehoshua M. Grintz's book "Mechkarim Ba'Mikrah":

"Braita of Mishmarot Kehunah" - Rabbi Dr. Shmuel Klein compared different piyutim that mentioned the names and hometowns of the different mishmarot of the post-destruction-of-the-Second-Temple era and concluded that during the time of the Mishna there was a known list that was passed down through the generations and was forgotten at some point. As it's a Mishnaic-era source, he referred to it as a "braita". By comparing different piyutim and variant MSS found in the Cairo Genizah, he believed he could re-write the "braita", which he proceeded to do:

An interesting thing about the listing of the "braita" is on the fourteenth mishmar, where it connects Yeshv'av with "Chutzpit". Melechet Shlomo wrote that the names Yeshv'av and Yeshvav (ישבאב, ישבב) are the same name (probably based off the Tosefta in Sukkah 4:13) and coincidentally (or not), R' Yeshvav Hasofer and Rabbi Chutzpit Hametorgeman are two of the Ten Martyrs.
Another interesting thing is that prior to the recompilation of this "braita", "Yevanit" (mentioned in the kinot and piyutim (see below)) was identified with Bilgah, because of the story of Miriam bat Bilgah who became a Grecian apostate and kicked the mizbe'ach. However, thanks to the "braita" we know that Yevanit is a reference to Imer (and was another name for the town of Yamniah, according to Rabbi Klein in Eretz Hagalil, pg. 40).
Interestingly, there's a piyut by Rabbi Elazar Hakalir that appears to state that the Chashmonaim were from the Mishmar of Imer (here, line 71 and some discussion here, pp. 9-10), as opposed to the tradition in the Book of Maccabees 1:2:1, where they are part of Yehoyariv.

Eicha Yashva Chavtzelet Hasharon by Rabbi El'azar Hakalir - The kina, as @DoubleAA noted, is about the fall of the mishmarot and includes nicknames and hometowns of the 24 mishmarot.

The identifications are based off of the "braita" (i. e., the sum of Rabbi Klein's research) brought above.

Eich Tenachamuni - I haven't been able to discover who the author is, but this kina is about the fall of the kohanim and mentions Mesarvei Me'ron. There's also a mention of "Bnei Chalak", so perhaps that's a reference to Mishmeret Chilkiyah.

For more on the "braita" and other piyutim and kinot based off of it, see here.

An inscription was found in a shul in ancient Caesarea featuring a list of the mishmarot: 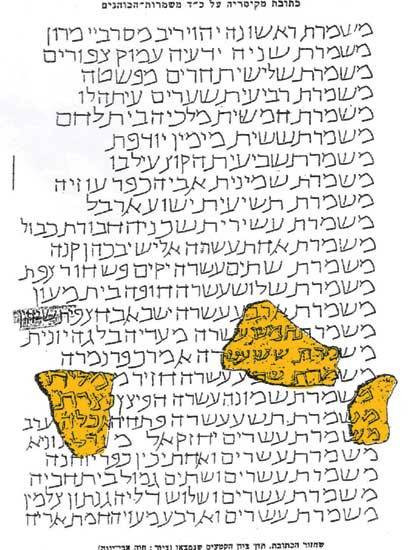 As can be seen from the picture, only three small fragments were found, but based on them, together with previous research done in the field of the mishmarot, a full reconstruction was created.

In 1970, an inscription was found on a column in a mosque in the Yemenite village Bit al-Khatzer listing the mishmarot. Not all of the inscription survived, but this is what was discernable:

It seems that whoever made this list also had some tradition of the list of mishmarot kehunah.

It should be noted that in the 70's the column featuring the list was found placed upside-down in the local mosque, with the top part having sunk into the floor of the building. The column was used as a decoration and for this reason, researchers were not allowed to pull it out. Aviva Klein-Franke noted in her essay על משמרות הכוהנים, המסורת ויהודי תימן, p. 333 concluded based on the fact that the visible bottom part was not the end of the list, that there was at least one other matching column with the rest of the list. However, this has long been lost. It should be noted that this decorative list had already been known at least by Rabbi Yechiya Tzabari, who mentions it in his autobiography as a "כוהני משמרי" that is found in Bit al-Khatzer.

A picture of the inscription from Klein-Franke's essay: 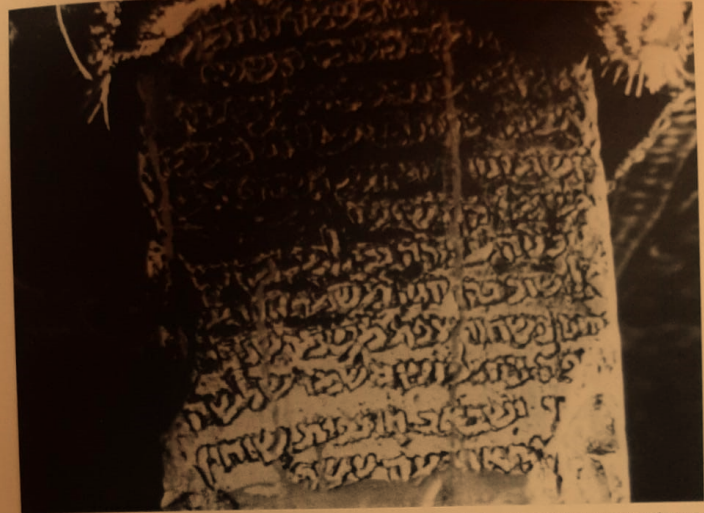 Near Yerushalayim a tomb was found, belonging to some of the descendants of mishmar Chezir, bearing the inscription:

"This is the grave and the Nefesh (burial monument) of Eliezer Hania Yoazar Yehuda Shimon Yochanan Benei (sons of) Yosef Ben (son of) Oved Yosef and Elazar Benei (sons of) Hania, Kohanim of the Hezir family."

1 A possible explanation for this title is found in Seder Olam Zutta ch. 9 where it is stated that in Giv'at Arbel there was a kohen named Yehoshua ben Saraf or Nisraf and in his estate the Reish Galuta Chizkiyah I was buried (see list of exilarchs here). The name Saraf/Nisraf (depending on the manuscript) might have been a family name of a prominent family of the mishmar who came from Arbel, and Yehoshua himself was likely named after the namesake of the mishmar.

1
Which Mishmar did the descendants of Eli Kohen Gadol belong to?

13
What did kohanim do the other fifty weeks of the year?
5
David's sons were kohanim - Really?
2
What did the Kohanim do if there was nobody who hadn't already done the K'toret?
6
Minimal number of kohanim working in the Mikdash
3
Mishmaros and Leap Years