The woman who killed King Avimelekh

The Book of Judges relates how Avimelekh, the son of Gideon rose to power and made himself a king by killing his seventy brothers. His eventual fate came, when he sieged Teiveitz and wanted to take a fortified tower (Judges 9:53):

And a certain woman cast an upper millstone upon Avimelech's head, and broke his skull.

Most commentaries I saw discuss the upper millstone regarding this verse, but they don't tell anything about the identity of this woman. For me it's quite strange that a woman could lift such a heavy stone, yet I failed to find anything about her. Do you know anything particular about her that escaped my attention? Besides being a serious blow to the ego of Avimelekh, why is it important that he was killed by a woman?

The medrash there explains a lesson (not by giving her identity, but by discussing gender):

And [yet] people vilify the name of the Lord in vain. It is therefore stated (in Eccl. 5:1), “Do not be rash with your mouth…. for God is in heaven and you are on earth.” For who would say that God is not in heaven and that people are not on earth? [Accordingly], Solomon has said, “Every time that the weakest of the weak is above, he defeats the warrior below.” Go and learn from Abimelech (in Jud. 9:53), “But a certain woman dropped an upper millstone on Abimelech's head and cracked his skull.”41Since the woman was above the warrior Abimelech in the tower of Thebez, her killing him is an example of a relatively weak person defeating a warrior from above. And if he was a warrior among warriors and there was none like him, and [yet] a woman [was able to] kill him from above, how much the more so in the case of the Holy One, blessed be He!

Admittedly, I'm not sure why the connection is made between God in heaven and the weaker power's being above -- it seems to be a kal vachomer. If the weak can win from above, all the more so, God wins as he is above. But God is able to win wherever he is, so I don;t see why "being above" matters.

Here's a crude Bronze Age one I found during an archeological survey: 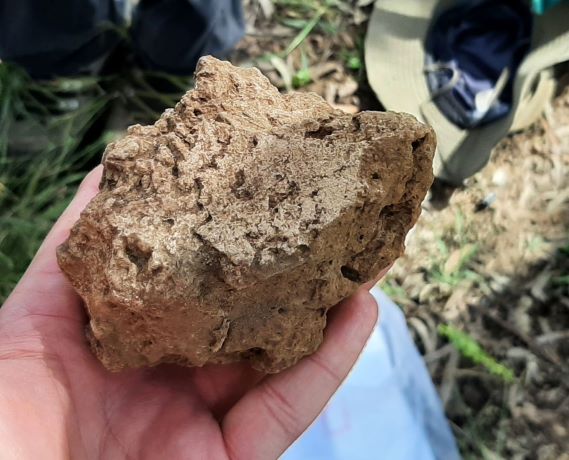 And some were larger than this, but still handheld, for home use.

With that said, Rabbi Avraham Taub in his book Divrei Tovah, p. 607 points out the usage of the seemingly unnecessary אחת to describe the woman - it would have been enough just to say "ותשלך אשה פלח...", with "אחת". Therefore he suggests that she was one particular woman; that perhaps this woman was not originally from Tevetz but from Shechem - the people of Shechem having been wronged by Avimelech - so she got her revenge.

3
What was the curse of Jotham the son of Jerubbaal?

2
Why did the people want a king?
3
Who is the author of Sefer Shoftim (Judges)?
0
Pretty woman - is it a test or a Mitzvah
1
Who originally conquered Jerusalem?
1
Why did the Rambam poskin that a Woman can’t be a King of Yisrael or Moshiach?
1
How was the concubine of givah killed