Over how many years did the Chanukah story take?

In Megilas Antiyochus, it speaks at length how there were 3 separate times Antiyochus's army came to Jerusalem (each time getting royally defeated), so I'm wondering over how many years did this story play out?

According to Josephus it was 3 years from the desecration of the beis ha'mikdash till its reinauguration.

Judah Maccabee assembled the people and told them that after the many victories which God had given them they ought to go up to Jerusalem and purify the Temple and offer the appointed sacrifices.

But when he with the whole multitude came to Jerusalem and found he Temple deserted, its gates burned down, and plants growing in the Temple of their own accord because of the desolation, he and those with him began to lament in their distress at the sight of the Temple.

So he chose some of his soldiers and gave them an order to fight the men that guarded the upper city until he has purified the Temple. When therefore he he had carefully purged it he brought in new vessels -- the menorah, the table and the incense altar, which were made of gold, and hung up the veils at the doors and restored the doors themselves. He also took down the altar and built a new one of stones that he gathered together, and such as had not been hewn with iron tools.

And on the twenty-fifth day of the month Kislev, which the Macedonians call Apellaios, they lighted the lights [phôta] that were on the menorah, and offered incense upon the altar, and laid the loaves upon the table, and offered whole burnt offerings upon the new altar.

As it happened, these things took place on the very same day on which, three years before, the divine worship had been reduced to an impure and profane form of worship; for the Temple had remained desolate for three years after being made so by Antiochus...

The beginnings of an answer can be found in סדר הדורות הקצר (p.53) it is quite comprehensive as far as providing a timeframe but not giving the specifics of each part of the story. Hence it is doesn't answer the question in it's entirety but it is clear that it did unfold over a number of years: 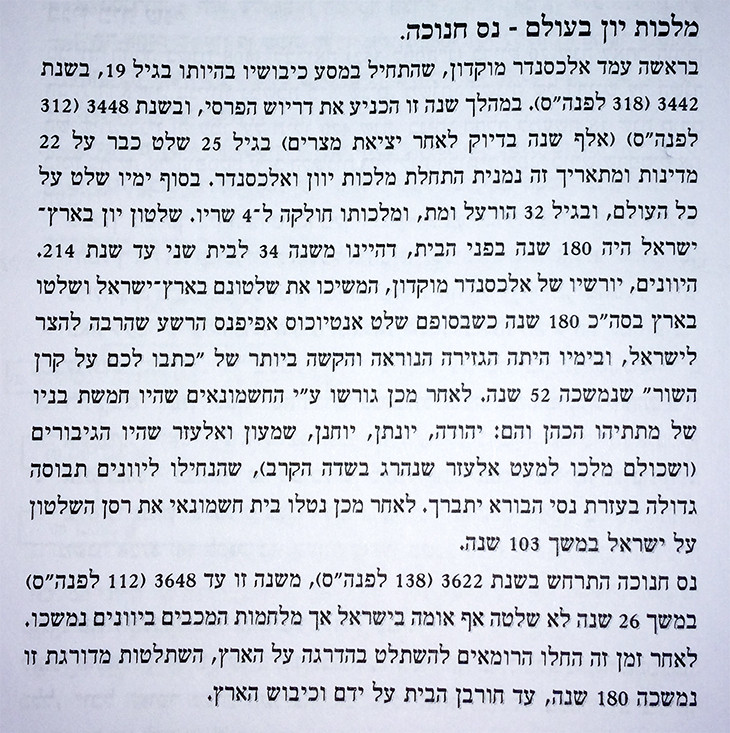 It begins with a bit of historical context and provides dates and timespans. Translation as follows:

At the beginning Alexander the Great reigned, who began his conquest campaign at the age of 19 in the year 3442. During this year, he subdued the Persian Darius, and in the year 3448 (1000 years exactly after the Exodus from Egypt) at the age of 25 he already ruled over 22 countries, and from this date belongs the beginning of the reign of Greece and Alexander. At the end of his life, he ruled over the entire world and at the age of 32 he was poisoned and died and his kingdom was split amongst his four ministers. The rule of Greece in the land of Israel was 180 years prior to the Temple, which means 34 years until the Second Temple.

The Greeks were the heirs of Alexander, they continued the dominion in Israel and ruled there for a total of 180 years, when at the end, the evil Antiochus Epiphanes ruled that many side with Israel. And during his days there were terrible and the most difficult being the "Write for yourselves on the horn of an ox" that lasted 52 years. After this, they were driven out by the Chashmonaim/Hasmoneans that were the five sons of Matisyahu the Cohen, and they were: Yehuda, Yonasan, Yochanan, Shimon and Elazar - they were mighty (and all kings except for Elazar who was killed on the battlefield), who inflicted on the Greeks a great defeat with the miraculous help of the Creator may He be blessed. After this, the Chashmonaim took the reins of power in Israel for 103 years.

The miracle of Chanukah took place in the year 3622. From this year, until the year 3648, in a period of 26 years no nation ruled Israel, but the Maccabean wars with the Greeks continued. After this time, the Romans began to gradually take over the country, this gradual takeover lasted 180 years, until the destruction of the Temple by them and the conquest of the country.

So according to this, Antiochus was in power for a period of 52 years in which his decrees against the Jews were in place, and only at the end of this period did the Chashmonaim apparently take action. What's more is that although the Maccabim would eventually take power, the Greeks weren't completely toppled and wars continued to rage between them for many years afterwards.

Not the answer you're looking for? Browse other questions tagged chanuka book-of-maccabees .

5
Chanukah in the Mishnah
3
Do we know of any opposition when the Hasmoneans decided to take the throne after the Chanukah story?
13
How straight do the chanukah lights have to be?
12
Fighting Wars on Shabbat
11
Why is the Miracle of Oil mentioned so much later than records of Chanukah celebrations?
2
Source for detail in the Chanukah story
4
Which of the *Zugos* were in charge during the Chanukah story?
1
Did the Samaritan cities fight with the Hellenists against the Maccabees?