In Bamidbar Rabbah 10:5 it says that Shimshon's mother was called Hatzlelponi:

Translation: The mother of Shimshon, her name is Hatzlelponi, and her lineage traces to the Tribe of Yehudah, as it says (Chronicles 1:4:3): "and the name of their sister was Hazlelponi".

However, in the gemara in Bava Batra 91a it says that her name was Tzelelponit:

"The mother of Samson was named Tzelelponit".

The midrash in Bamidbar Rabbah bases itself on the name used in the Tanach. Why then, did the gemara use a different name (albeit only slightly different)?

The derasha in Bemidbar Rabba (which is indeed "thought to be considerably later") includes the derivation from the verse in Divrei Hayamim, which would serve as a check from the name shifting. Meanwhile, the statement in Bava Batra does not include a derivation from a pasuk, and indeed, some commentators (such as Shteinsaltz) take the Talmudic statement which follows,

It is important with regard to an answer for heretics who inquire into the names of these women, which are not stated in the Bible. One can reply that there is a tradition handed down concerning their names.

Lack of an explicit verse means that the seemingly meaningless name, passed in tradition orally and then textually, could slightly shift.

Examining manuscripts of the gemara on the Hachi Garsinan website, I found that most agree with our printed Vilna Shas with צללפונית - namely, the Venice, Pizaro, Hamburg, Paris, and Escorial all have this reading.

In the Munich manuscript, they have צלולפוני with a final mark over the last letters, which would indicate a final ת but still is closer to the name as it appears in the verse in Divrei Hayamim. All you need is a scribe to assume that there should be an apostrophe there and it can get inserted.

Further, in the Vatican manuscript, we have הצללפונית, which has the initial ה though also unfortunately the final ת. Here is a picture of this: 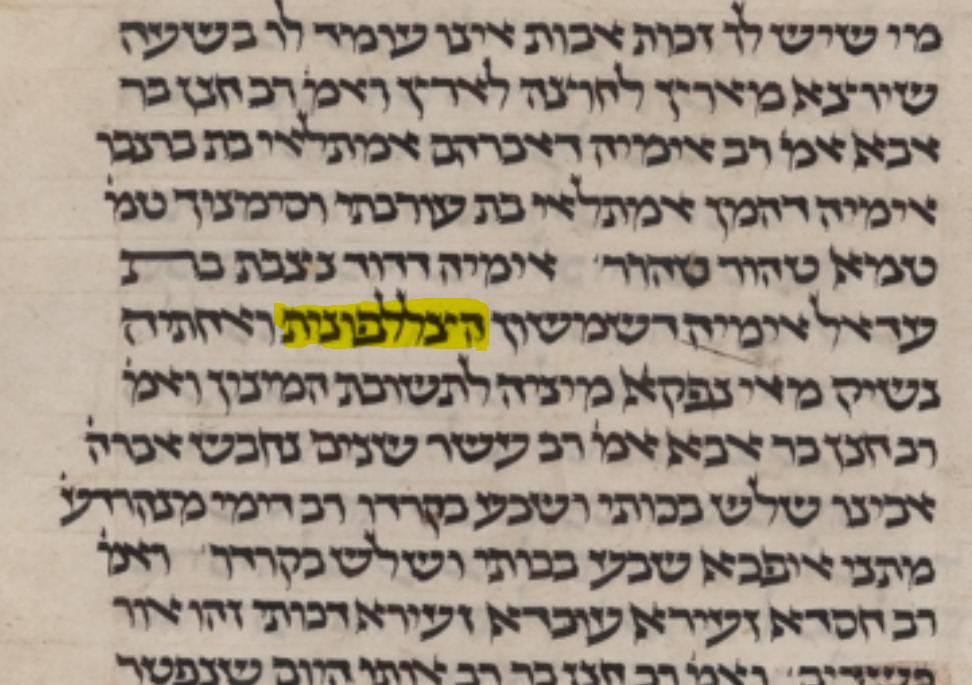 Not the answer you're looking for? Browse other questions tagged talmud-gemara names tanach midrash .

23
Why Yehoshua **Bin** Nun and not Yehoshua **Ben** Nun
1
Bible inerrancy and the Ashbaal→Ishboshet change
2
Hints and thoroughness in Talmudic referencing of Tanach
7
I need people from the Tanakh who represent “curiosity”, “impatience”, and “resignation”
5
Relationship between “Tafasta mi'uta tafasta” and Occam's Razor
0
Are the old testament, the Talmud and the Torah all viewed with equal reverence?
1
What was Jacob's nisayon (and where do we find this in the midrash)?
6
Which foreign names did Jews associate with Hebrew names, and why?
1
Does the term ha-ruach ha-qadosh occur in the Talmud, Midrash, and other rabbinical literature?