Was it David's custom to go into battle without an armour?

This is a two-part question:

A. Does this passage imply David's custom to go into battle without a military type of protective covering?

B. If this was only an exception (not that I know it is an exception), why would this be an exception, as fighting Goliat would be as dangerous, if not the most dangerous thing he ever did?

To familiarize oneself with the incident in question, the following miyodeya question might serve as a background information.

Understanding the incident with Goliat

I wrote an essay a couple of years ago that dealt, in part, with these questions.

The answer to your first question is: Yes and no. David's military uniform depended on which weapon he was using in battle. David's favored weapon at this stage of his life was the sling (קלע, kelah in Hebrew). Not the rickety little slingshot that some prankster kids may play with, the sling was widely considered an incredibly deadly weapon.1 Evidence for this comes from the fact that ancient armies had units of elite, sharp-shooting "slingers", comparable to today's elite sniper units. Further evidence for this we can find in Shoftim 20:16, in the description of the Tribe of Binyamin's army during the Battle at Giv'ah:

"of all this force—700 picked men—were left-handed. Every one of them could sling a stone at a hair and not miss."

700 men with that level of precision is a very deadly and powerful force.2

As for the sling-stone itself, here's what one looked like: 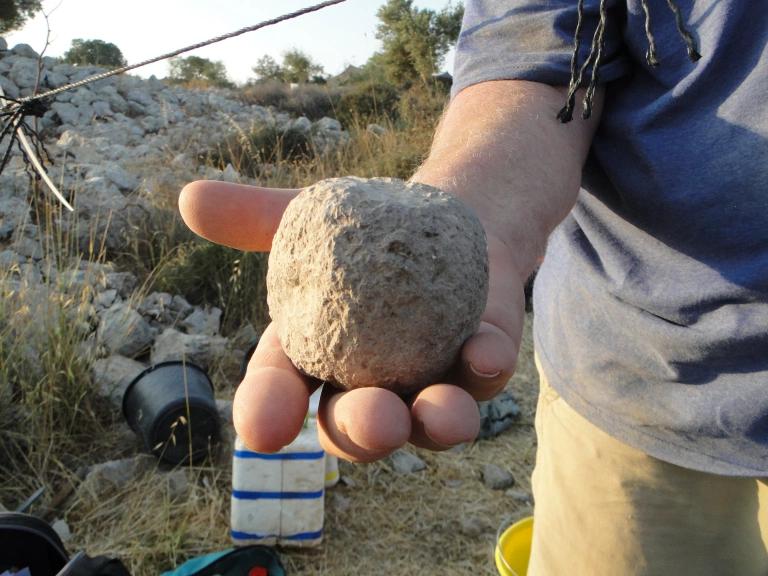 (picture from this site) 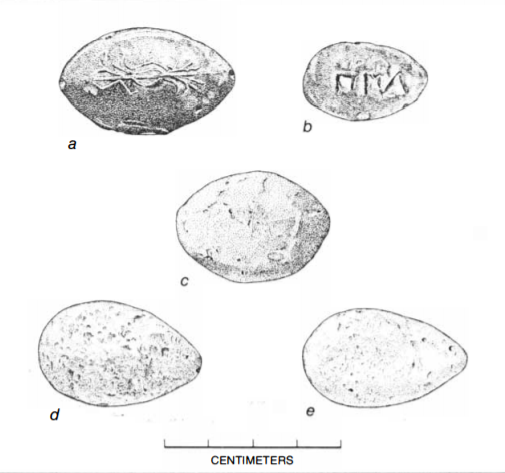 (Picture from this essay)

The way the Tanach describes David collecting stones leads to a common misconception, that he was just picking up random little pebbles. In fact, he was looking for "חֲמִשָּׁה חַלֻּקֵי אֲבָנִים מִן הַנַּחַל" - five smooth stones from the river. Why are they stated to have been smooth? Because, as we can see from the above examples of sling-stones, smoothness was crucial to the kinetic movement of the stone upon being fired.

As to how the sling was fired, upon loading a stone, the slinger would begin to swivel his arm round and round to build up kinetic momentum before letting go of one side of the sling in order to release the stone, as is illustrated here: 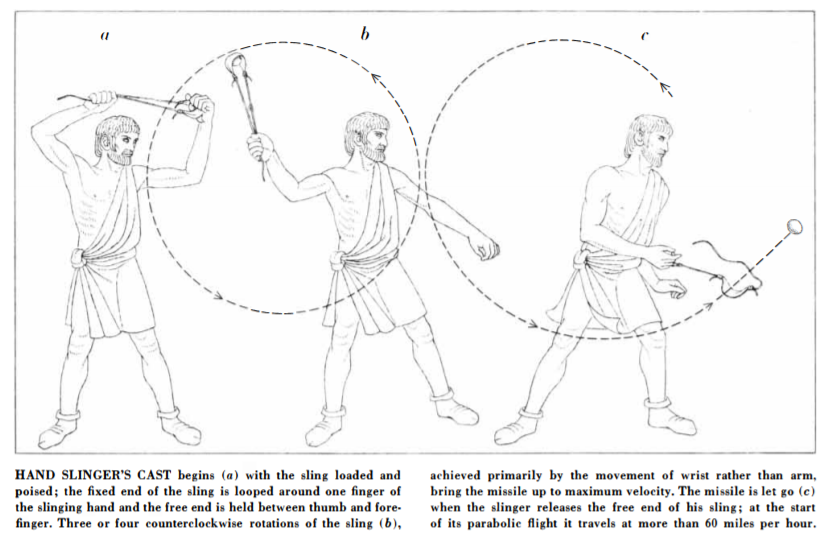 (Picture from this essay)

Having said all of this, now we know why David was unaccustomed - at least at this stage of his life - to wearing armor. Speed and strength were crucial to the success of the slinger. At best they would have worn light-weight armor to protect from basic injuries, but not King Shaul's heavy armor. Not to mention that heavy fist-size sling-stones would already weigh him down enough. He needed to conserve enough strength and to allow for his legs to carry him fast enough as he was charging while swiveling the sling.

The reason I wrote in the beginning also "no", because we know that David didn't always use a sling. Later in his life he used a sword. For example, in Shmuel 1:25:13:

Swords or short spears are used for close-combat fighting. In close-combat, personal protection is crucial, so I believe that during such times David did wear armor.

As for you second question, though this was not entirely an exception, as I've explained, David really knew what he was doing when he chose to attack Goliath with the long-range-combat sling rather than a close-combat sword as was given to him by Shaul:

First, we know that David was already trained in the sling - as evidenced both from his expertise in choosing proper stones and knowing to lose the armor and also from his story about killing the bear and the lion. Second, there's evidence in the text of the story that Goliath had a number of weaknesses:

a. He himself had very heavy armor that weighed 5000 bronze shekels, and spread across his body. Furthermore, he carried not one but three (!!!) weapons: A sword, a spear and a javelin, which also weigh a lot. We know that all of this slowed Goliath down because of the description of the beginning of the charge:

That's a lot of words to describe Goliath charging David. It seems it was written like this because Goliath literally had difficulty getting up and beginning the charge. By comparison, David's charge was described like this:

Now that's how you charge - with speed. Two words for speed - to emphasize that he was sprinting very fast and managed to quickly cover much of the distance of the battlefield.

b. Goliath was over-confident:

He stopped and called out to the ranks of Israel and he said to them, “Why should you come out to engage in battle? I am the Philistine [champion], and you are Saul’s servants. Choose one of your men and let him come down against me. If he bests me in combat and kills me, we will become your slaves; but if I best him and kill him, you shall be our slaves and serve us.” And the Philistine ended, “I herewith defy the ranks of Israel. Get me a man and let’s fight it out!”...The Philistine stepped forward morning and evening and took his stand for forty days." (1:17:8-16)

c. When David put his sling-stones in his pouch and took the sling in his hand, Goliath refers to "sticks":

From this we can infer that Goliath had bad eyesight3, mistaking the sling not just for a different object, but he actually saw double (if not worse)! Worse yet, because of this crucial mistake, Goliath actually thought that he was going to duke it out with David in close-combat, which was the only thing he was properly prepared for.4

It seems plausible that David knew at least some of these things, and so, also for these reasons, chose for this battle in particular, to bring his slinging A-game, which meant losing the armor. It may sound risky, but besides for knowing all or most of the above factors, David was doing it for the Kiddush Hashem:

"David replied to the Philistine, “You come against me with sword and spear and javelin; but I come against you in the name of the LORD of Hosts, the God of the ranks of Israel, whom you have defied." (1:17:45)

1 I heard from Rabbi Uzi Bienenfeld, head of Midreshet Orot Etzion, who also gives classes in places such as Machon Meir, that his daughter got to know during her national service in Israel a kid who made aliyah from Ethiopia. The kid told her that when he lived there, he would go shepherd in the wilderness the family's livestock by himself. One day, he ran into a leopard. He grabbed his sling, loaded it, fired and killed the leopard. Yes, really.

2 I've heard - though I can't remember where - that Ehud ben Gerah was one of the remnants of this elite fighting force, which is why he was left-handed. These slingers exercised their left hands more than their right hand, to the point where they did everything with their left hand.

3 I first heard of this idea from this TED talk by Malcolm Gladwell. I was amazed that it fit so well with pshat.

4 While it's true that he did have at least one long-distance weapon (either the javelin or the spear, or both, depending on how you interpret which weapon was which exactly and their intended uses), it's quite clear that he wouldn't have been able to handle it properly, because of his other weaknesses: poor eyesight, over-confidence and heavy armor. I believe it was from Rabbi Shmuel Eliyahu, the chief rabbi of Tzefat, that I heard that Goliath was both weighted down by his armor, and his bodily proportions were inhuman (i.e. though he was a giant, he was disproportionate in size to a regular human) which made him even more cumbersome, so much so that his shield wasn't held by him, but by another soldier. However, as @Joshua has pointed out, this is an incorrect understanding of what a shield-bearer was. Nonetheless, Goliath's physical proportions also apparently encumbered him.

7
Understanding the incident with Goliat

6
Why did they cancel the kohein races over an isolated incident?
4
Did King David Expose himself (nude) while dancing or was it just unfit for him in the eyes of Michal
8
Why didn't Shaul know who David was when David fought Goliath?
9
Were there divergent calendar practices after the calendar was made into a fixed calculation
4
A holistic explanation of King David's use of Avishag
3
In 2 Samuel 8:4 was David rendering the horses unable to stand up (and graze) or just ruining them as war horses?