Eruvin 43a: Who was Yosef the Demon?

The Gemara in Eruvin 43a asks the following:

As one of the proofs that it does not apply above ten handbreadths the Gemara states the following:

Who said those teachings, and delivered them from one place to the other? Was it not Elijah the Prophet, who traveled from Sura to Pumbedita by way of a miraculous leap through the air above ten handbreadths from the ground, who said them? Apparently, the prohibition of Shabbat limits does not apply above ten handbreadths, for Elijah would not have transgressed this prohibition. The Gemara rejects this argument: This is no proof; perhaps Yosef the demon, who does not observe Shabbat, reported these teachings and brought them from Sura to Pumbedita.

What I know so far

I looked around at a couple of blogs (see here and here) but the material does not seem very well sourced.

Are there any documented sources who explain who he is?

Adding to @Dov's answer, Yosef the Shed was a shed who would assist the sages by giving them info on shedim, as Sforno writes on Vayikra 17:7:

Translation: "This shall be to them a law for all time that they may offer their sacrifices no more to the goat-demons, even if they don't accept them upon them as a god in way whatsoever, but were interested in their company for the demons to be servants to them and assisting them in their businesses or their ventures to far-off lands, as they mentioned (Chulin ch. Kol Habasar) about Yosef Sheida and the sheida that was often at the house of Rav Ashi..."

In this ParshaBlog post, Rabbi Waxman explains why he thinks that Yosef was a shed and not a human expert on shedim:

In my earlier post I considered the possibility that Yosef Sheda was a human expert on demons. I would now say that I regard this as unlikely, based on the wording in Pesachim: אמר רב פפא אמר לי יוסף שידא בתרי קטלינן בארבעה לא קטלינן בארבעה מזקינן בתרי בין בשוגג בין במזיד בארבעה במזיד אין בשוגג לא Or in English: Rav Papa: Yosef the Shed told me that Shedim kill on account of two (e.g. cups); they damage on account of four, but they do not kill; 1. They strike on account of two whether it was Shogeg or Mezid; they damage on account of four only if it was Mezid. From the wording of קטלינן, and מזקינן, "we kill" and "we damage", it rather seems that Yosef Sheda himself is a sheid.

As to what sort of demon Yosef the Shed was exactly, based on this answer, it seems he was a kind of "Jewish demon", who would study Torah, and for this it seems that he was friendly with the sages (and maybe that also got him a Jewish name, rather than something like "Ashmadai").

Translation: "There Rashi explained that he didn't keep Shabbat and why did he need to explain this so. Therefore, there it isn't that the Jew was called a demon but the opposite, that demon who would say those things before R"Ch and before Rava, the sages of the Talmud called him by the name Yosef, perhaps because they didn't want to mention only the name of the destroying demon, per "So you choose crafty language" they added to him a holy name. But in Yevamot 122a came to R"Ch and said Yonatan Sheida etc...so too here, the demon who taught so to R"Ch was called by the holy name Yonatan as well..."

So according to Rabbi Asad, Yosef and Yonatan (and other such shedim, if there were/are) had demonic names but were given by the sages new names so that the sages wouldn't need to use their demonic names.1

Just as an interesting FYI, Yosef the Shed appears as a character in the Orthodox Israeli comic book "L'azazel Im Baba" by Shay Charka2. Here's one image: 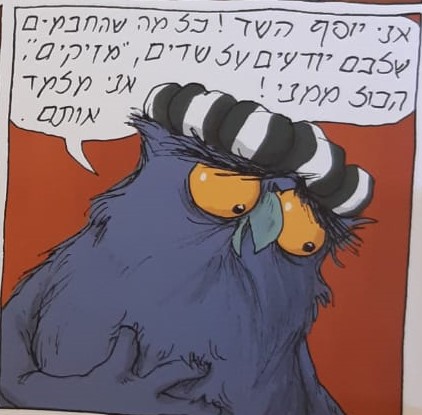 1 Afterwards, however, Rabbi Asad expounds a little bit on the view that these were men and not demons.

2 Disclaimer: I'm not affiliated with him in any sort of way, other than the fact that I love his work...

There doesn't seem to be much to work off. The only thing I have to add is the following:

As has been noted, he also appears in Pesachim 110a - Interestingly, in both instances Rav Steinsaltz zt"l interprets his name to mean that he was a sheid/demon himself. See here for Eiruvin 43a and here for the above case in Pesachim.

However, it is worth noting that Rashi elsewhere in Yevamos 122a upon noting someone with a similar title, namely 'Yonasan Sheida', writes:

Yonsasan Sheida taught me - i.e. his name denotes that he was either a sheid or an expert on them (and that's why he warranted the title).

So it could be based off this Rashi that Yosef Sheida was similarly, possibly only a human that happened to be an expert on the topic of demons.

The (אור זרוע (ח"ב עירובין סי' קמז speak a bit about him. Rashi on the page says that שדים do not keep shabbos. However, the אור זרוע quotes his rebbi ר' יהודה החסיד who says that the שדים accepted the torah (with some conditions, see there). In explanation of the gemara, he says that יוסף had a subterranean communication system that enabled them to communicate across distances even on shabbos!

6
Who is Rebbe Nachman referring to when he mentions "Sheid Yehudi" (Likutei Moharan 12)
-2
Would a conversion witnessed by three Jewish sheidim be approved?

2
Who is the Demon Ketav Meriri?
9
Who was the קדוש מרדוש?
2
Who are the demons in Deuteronomy 32:17?
5
Sources about the Kosher status of Royal Jelly
4
Who was the Ramchal fighting?
7
Am I allowed to use the word "sheid" (demon)?
2
Who was the Megilat Esther?