Who knows a third?

In the spirit of the song "Echad - mi yodeya", please post interesting and significant Jewish facts about the number ⅓.

Lazy gematria may be worthy of discission, but perhaps not of a full-fledged answer.

Check out mi-yodeya-series for the previous three hundred forty nine entries in this ongoing series.

Please include sources for your information wherever possible, as with all other answers on this site.

I did not find this number asked anywhere.

The Gemoro in Kiddushin 30a writes:

The Zman Tefila for Shacharis is (four hours) or a third of the day.

The Gemoro in Bava Metzia 42a writes:

And Rabbi Yitzcḥak says: A person should always divide his money into three; he should bury one-third in the ground, and invest one-third in business [bifrakmatya], and keep one-third in his possession.

The Gemoro in Shabbos 20a talks about how bishul takes effect from the moment that a solid food becomes edible. The Gemoro talks about Ben Drosai who was a robber who didn't have time for his food to be completely cooked:

GEMARA: We learned in the mishna that one may only roast meat and other food items if there remains sufficient time so that they could be roasted while it is still day. The Gemara asks: And how much do they need to be roasted in order to be considered sufficient, so that it will be permitted to complete their cooking afterward? Rabbi Elazar said that Rav said: So that they will be roasted while it is still day like the food of ben Drosai, which was partially roasted. Ben Drosai was a robber and pursued by all. He could not wait for his food to roast completely, so he sufficed with a partial roasting. It was also stated by another of the Sages, as Rav Asi said that Rabbi Yoḥanan said: Anything that is already cooked like the food of ben Drosai by a Jew, no longer has a problem of the cooking of gentiles. If a gentile completed cooking this food, it is, nevertheless, permitted to eat, even though, as a rule, it is prohibited to eat food cooked by gentiles. It was taught in a baraita, Ḥananya says: With regard to anything that is already cooked like the food of ben Drosai, it is permitted to keep it on the stove on Shabbat and even though this stove is not swept of coals and the burning coals are not covered with ashes. Since the food was already cooked to that extent, there is no concern that he will come to stoke the coals. (Sefaria translation and added annotation)

I.e. since he was in such a hurry his food would only be one-third cooked.

The day and the night consist of twenty-four hours. It is enough that a man should sleep a third of it, which is eight hours. [Mishneh Torah, Human Dispositions 4:4]

There's a Mitzvah to 'beautify' or enhance a Mitzvah like Tallis, Tzitzis & Arba Minim (Examples are from Rashi there) up to a third over original costs.

And in our days, when it is common to lease a bath house for a year, a half-year, a third, or a quarter, as a field (is leased), it is permitted to rent a bath house to a gentile. [Bartenura on Mishnah Avodah Zarah 1:9]

It is a biblical estimate for 1/π - the ratio between the diameter of a circle and its circumference: 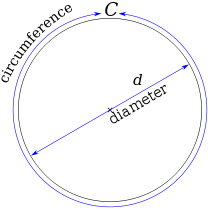 "And he [Hiram] made a molten sea, ten cubits from the one rim to the other it was round all about, and...a line of thirty cubits did compass it round about...." — First Kings, chapter 7, verses 23 and 26