Help me find a quote from Rav Hirsch

I have heard famously in the name of Rav Hirsch that he wanted to close all the synagogues in Germany for a 100 years so that people would value prayers and Judaism properly.

Could someone show me where it is written? Yashar Koach

As quoted, this passage comes from Dayan Dr. Isidore Grunfeld's introduction to his translation of Horeb, one of Hirsch's major works, Introduction, lxix. Although he is generally very careful about quotation, Grunfeld gives no volume or page number for this passage, merely citing one of Hirsch's "most trenchant essays".

I cannot find any passage that exactly fits. But I will post here one that is very close -- so close that I conjecture that it is the one that Grunfeld had in mind, and that he was quoting from memory.

“Perhaps the most radical cure in a time of confusion and the loss of all values would be the – provisional – closing of all Synagogues! Let such an idea not frighten the reader. The closing of all Synagogues would not affect or alter the precepts of the Divine Law one iota. But even a hypothetical announcement of the removal of the prohibition against eating the gid ha-nasheh, the sinew of weakness, for example, would shatter the very foundation of God’s Law! The closing of all Synagogues through Jewish hands would constitute the loudest protest against the denial of the Divine Law in life and home; it would give the most drastic emphasis to the truth that Divine Judaism embraces and dominates the totality of Jewish life and does not find its fulfilment in the halls of prayer and worship. God’s Temple and His Law must rule and shape our daily lives – this would effect the lasting cure for all our ailments. Then perhaps, we would again be worthy to regain our Synagogues and ultimately even the ‘bloody’ rite of sacrifices at Zion.”

This is from one of Hirsch's essays on the month of Av, when the fast on the 9th commemorates the destruction of the Temple. His point is that the Temple was destroyed because Jews lost sight of its higher purpose -- the localization of Jewish aspirations to serve God through the observance and study of the Torah, which was at the same time the localization of all people's aspirations to serve God through the full actualization of human powers -- and only in the absence of the Temple could the necessary reboot be undertaken.

Dayan Dr. Isidor Grunfeld, who translated Horeb into English, quoted the following paragraph in his Introduction thereto, on page lxix. He cites but doesn't identify an essay by R' Hirsch as the original source.

If I had the power I would provisionally close all synagogues for a hundred years. Do not tremble at the thought of it, Jewish heart. What would happen? Jews and Jewesses without synagogues, desiring to remain such, would be forced to concentrate on a Jewish life and a Jewish Home. The Jewish officials connected with the synagogue would have to look to the only opportunity now open to them – to teach young and old how to live a Jewish life and how to build a Jewish home. All synagogues closed by Jewish hands would constitute the strongest protest against the abandonment of the Torah in home and life.” 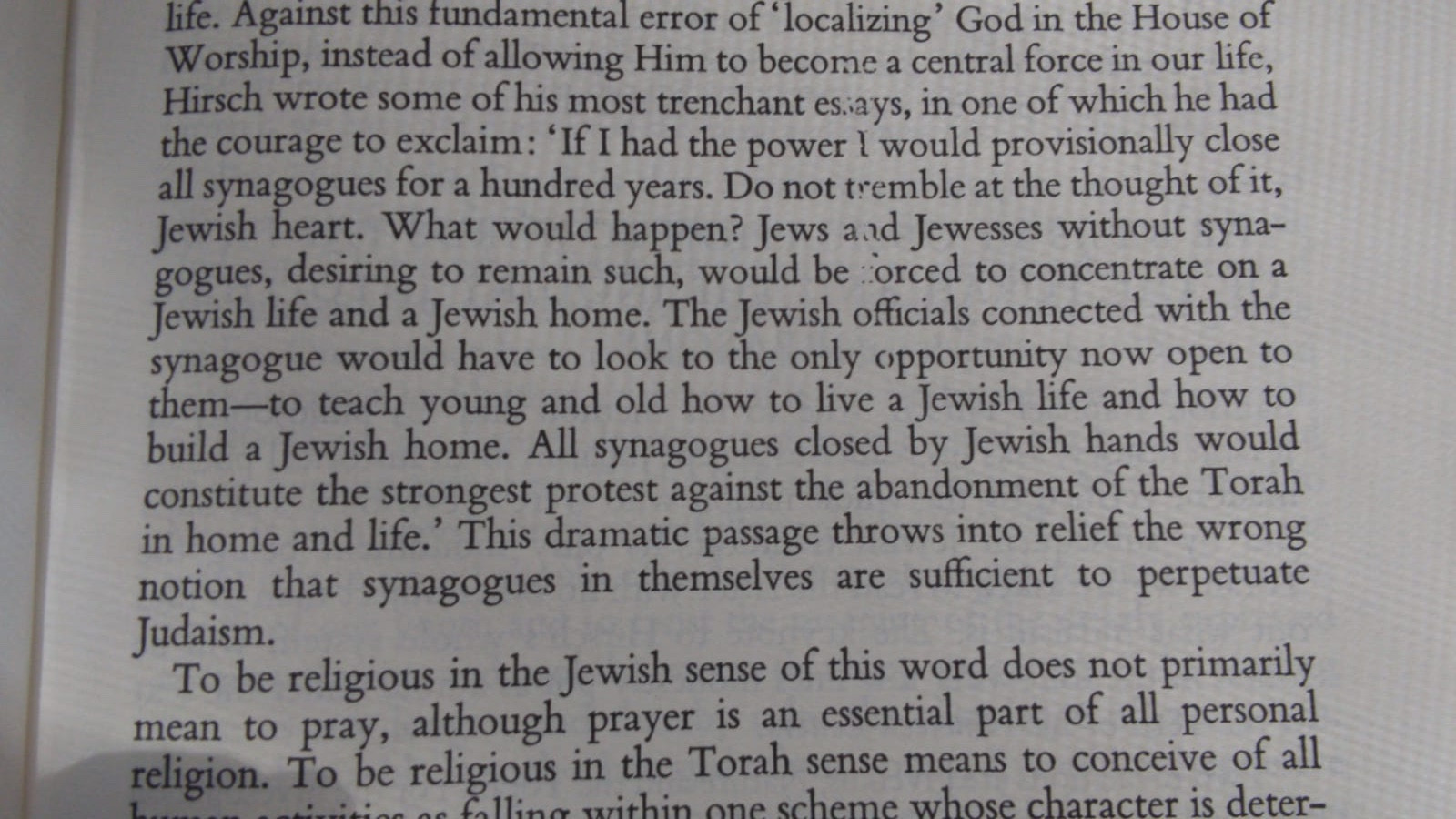 Hat-tip to R' Yitzchak Charner, who quoted this a couple of weeks ago in the newsletter of the Torah School of Greater Washington.

Not the answer you're looking for? Browse other questions tagged hashkafah-philosophy samson-raphael-hirsch .