Are the vowel points part of the inspired word?

From what I can tell, when writing Hebrew, the vowel points are optional so that if you leave them out, you might confuse עלה (âleh, foliage) with ('ălâh, a burnt offering). That's a simple example, which I went to look for. The vowel pointing is optional and the two words are spelled the same if you leave it out.

Are these pointings part of the divinely inspired text?

The Masoretes from the 10th Century provided the codified system of system of vowel points and accent markings of the received Hebrew text. They assigned the vowels and accent marks according to oral tradition, since Hebrew manuscripts evident in the Dead Sea provide the tell-tale signs of accents and vowels.

The earliest witness of Hebrew Scripture comes from the Dead Sea Scrolls. The following text of Psalm 12:8 (Plate 890, Fragment 4) comes from the caves of Naḥal Ḥever. The general consensus among scholars is that these fragments date somewhere between the third and first centuries BCE. In this respect, this fragment would be the best presumptive witness to the “original” version of this verse in Hebrew. Please click on the image in order to enlarge and view the online source. 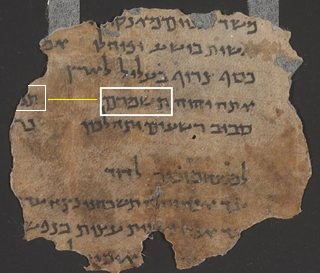 Of interest, there is a distance of 1.25 cm between consecutive words in the middle of the verse. That is, the word (תשמרם) and the word that follows (תצרנו) are 1.25 cm apart. This physical distance between these two words in the middle of the verse coincides with the dichotomy of each verse in the Masoretic Text based on the accent marks, which are based on the vowels. That is, the Masoretic Text, which would appear more than 1,000 years later, contains a codified system of cantillation, which is musical but is based on the logical divisions and dichotomies of the verses of Scripture. These dichotomies stem from the vowels, which (while not evident in the Dead Sea Scrolls) were communicated through oral tradition. In other words, this fragment of the Dead Sea Scrolls contains the same separation (dichotomy) as the Masoretic Text, which leads us to conclude that the vowels existed through oral tradition, otherwise the dichotomies would not be evident. Please see the image below. 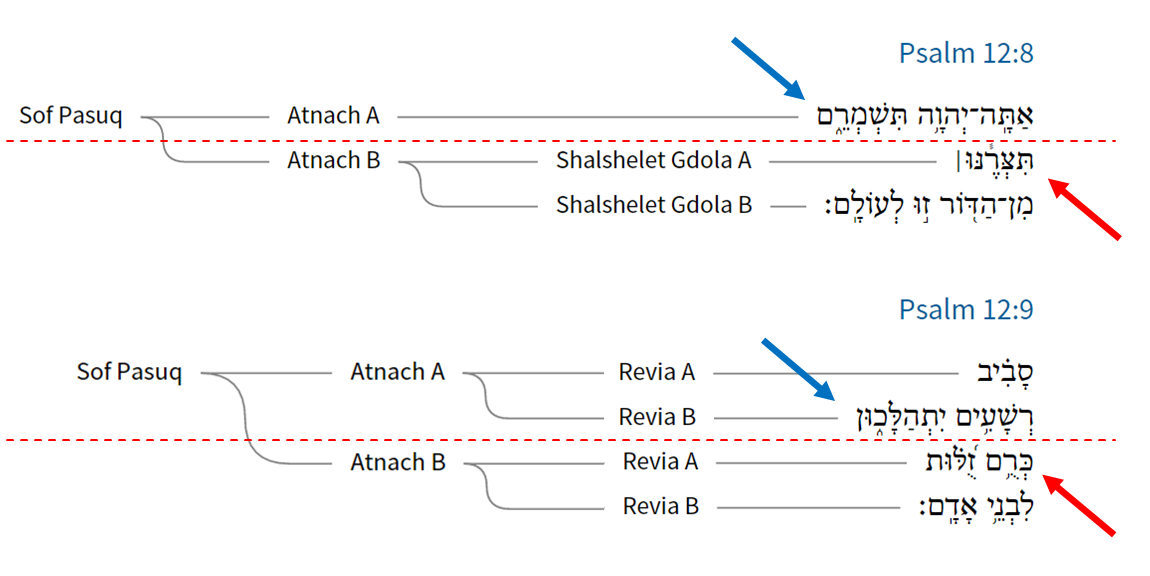 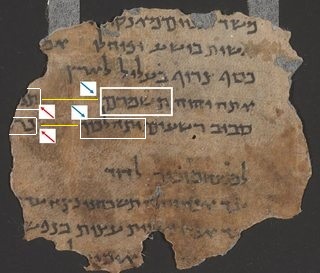 In other words, the Jews appear to have practiced a system of dichotomy which will appear over 1,000 years later in the codification of cantillation and vowel markings by the Masoretes. This dichotomy in this fragment is an exact coincidence with the received Tiberian Masoretic Text of today.

Finally, one renown authority on Hebrew cantillation in the 19th Century was Dr. William Wickes. Wickes believed that the vowels and cantillation were two sides of the same coin. In his treatise he writes that

FROM time immemorial the reading of the sacred books in the synagogue has been a kind of cantillation, or musical declamation. This mode of recitation was propagated at first, and through many generations, by oral instruction and manual signs alone. At length—probably towards the close of the seventh century of our era—the attempt was made to represent it by written signs, introduced into the text. . . . The introduction of these musical signs was, in all probability, simultaneous with that of the vowel-signs—an improvement in which, too, the Syrians had led the way. The one notation fixed the traditional pronunciation of each word, the other its traditional modulation. The two together furnished the needful directions to the Reader for the correct recitation of the sacred text. (emphasis added)

These alignments of dichotomy and words (and, by extension, vowels) therefore provide the best witness to the “original” version of this verse in Hebrew. The presumptive conclusion here is that the Masoretes codified the oral tradition of vowels and accentuation, which came from the inspired authors of Scripture.

The answer is, yes and no.

A Torah scroll or scroll of the prophets or miegilaos or other writings (those do exist, there is a tehilim scroll in the back room of the kotel cave) is always written without vowel markings.

The pointing themselves are from about one thousand years ago, and are known as the Tevarian system of vocalization. There was a different system of vowel marked used in Babylonia at that time known as "nikud elyon" or upper marks, because they were written above the letters, unlike the current system where most vowel marks are under the letters.

Not the answer you're looking for? Browse other questions tagged jewish-books vowels-nekudot .

3
How should the vowel/s represented by "yud yud" be pronounced outside of Yiddish?
18
Aleph with a Dagesh
10
What are the rules for sh'va na?
3
Are there any non-inspired writings before Philo's time?
2
Why is there no דגש in the ת in the word "וּכְתַבְתָּ֛ם"?