Why do conservative Jews wear a tallit like a shawl? [duplicate]

I have had the opportunity to pray with conservative men several times both in orthodox and conservative synagogues. Inevitably the conservative men I prayed with wore their tallit like a shawl unlike the orthodox way which has the garment laying such that 2 of the fringes are in front of the person and two are behind. I would like to know if there is a reason according to the conservative movement as to why the tallit is worn in this fashion. 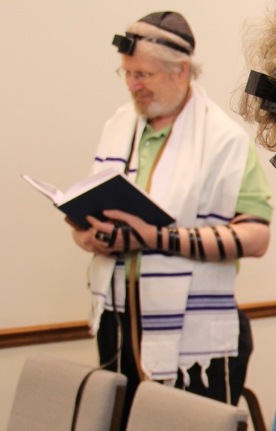 As pointed out by user Josh K in the comments, this is the way many communities in Western Europe don the tallit.

Since the Reform Movement was born out of Germany in the late 19th Century, they naturally had adopted this style of wearing the tallit. What we now call Conservative Judaism branched out from the German Reform community and therefore generally does it the same way.

Conservative Judaism doesn't have an official stance on how the tallit should be worn though, so nothing is stopping an individual or congregation from choosing to wear the tallit the more "Orthodox" way.

Not the answer you're looking for? Browse other questions tagged tallit-gadol conservative-judaism .