Can anyone explain the meaning of this amulet / inscription?

Right before my grandfather went away to fight in WWII, a rabbi in Munkács (מונקאטש) gave him a small cloth container that had a piece of parchment in it, as a kind of amulet. The piece of paper has Hebrew lettering on it that seems like it is some kind of acronym. My grandfather died 15 years ago and didn't leave us with any record of what it meant (if he even knew). My grandmother is 88 and doesn't know what it stands for. Does anyone know what this means? Here's a picture of it -- it is about 1/3 the size of a playing card. 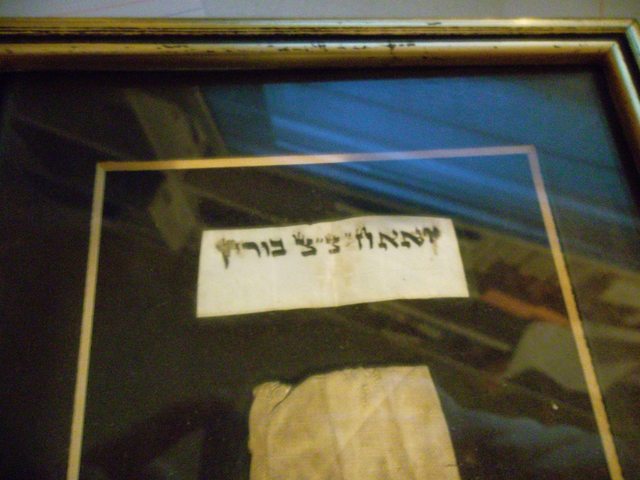 Some work on this mystery has already started over at reddit.

I'm not certain about the last letters, but I'm sure there is a small צ (between the ח and first צ) and a descender under the first letter. The descender could have resulted from having been folded against the first letter, but there is no evidence of other letters transferring.

This is sort of a comment on the question and on other answers but has some ideas for the resolution of the question also, so I'm posting it as an answer.

Not the answer you're looking for? Browse other questions tagged blessing chasidut-hasidism mysticism-kabbalah acronyms .

1
What does this piece of jewelry say?

5
Meaning of 5th of the Sheva Brachos
5
Meaning of the (Hebrew?) abbreviation Ka"H
1
Could someone explain the significance of this headwear?
4
Explain the beginning words of the 1st blessing before Shacharit Shema
5
Meaning of “lifnei kisei kevodekha” in the blessing of asher yatzar
1
What is the Hebrew text for this prayer?
2
How does one explain to a non-Jew why we wash our hands 3 times after using the bathroom?
0
What exactly is the meaning of “I will hide [haster asteir] my face on that day?”