Yaakov and the Angel: Hand to Hand?

In the encounter between Yaakov Avinu and the "man", it says (Genesis 32:26):

When he saw that he had not prevailed against him, he wrenched Jacob’s hip at its socket, so that the socket of his hip was strained as he wrestled with him.

He describes the physical interaction: "(Yaakov Avinu was) like a man who is hugging his fellow, and his hand reached to the "kaf yemino" of his fellow.

Rashi there explains kaf yemino to be referring to some part of the right thigh. This is in accordance with the traditional explanation of the origin for the prohibition of eating the sciatic nerve.

In the chumash Da'at Mikra (page 431 for those with this book available), the explanation on "ויאבק" says as follows:

According to this citation from the same gemara in Hulin, it is saying that he was grasping the opposite hand of his opponent, not the thigh.

My question is: what is the source of the Da'at mikra which is quoting כף = hand and not thigh? The vilna shas seems not to say this. Does anyone know of other girsa'ot or midrashim that might support the viewpoint cited by Da'at mikra?

This seems to be more a question of understanding the difference between a human being and an angel.

The word, כף, has multiple meanings (arch, hollow, palm of hand, sole of foot, etc.) and one must look at the specific context to understand the meaning.

Human beings have arms and legs. So in regard to Yaacov Avinu, it is clearly referring to his thigh and the concave spot behind his knee.

That is where on his body, he was touched.

Angels, however, are considered animals, either domesticated or wild. They do not have arms, but four legs.

And so the angel was using the hand on his front leg which would correspond with an arm on a human being. And this also follows the Targum Onkelos which clearly delineates בכף-ירכו as being the limb of the angel, while כף-ירך is referring to Yaacov’s limb.

This entire posuk is usually not understood well among Torah students because they are not usually familiar with the martial arts, in this case, wrestling.

To understand what the angel was trying to do, see the following clip of a wrestling instructor teaching how to perform a leg takedown.

His hand - [The attacker's] right [hand] touches the right hip joint of his rival from behind.

So the "hugging" maneuver that R' Yehoshua ben Levi mentions, was not a leg take-down (@Yaakov Deane's answer) - It was a front bear hug!! [see image]

The Da'at Mikra's understanding, makes no sense fighting-wise after reading the Gemara and Rashi. 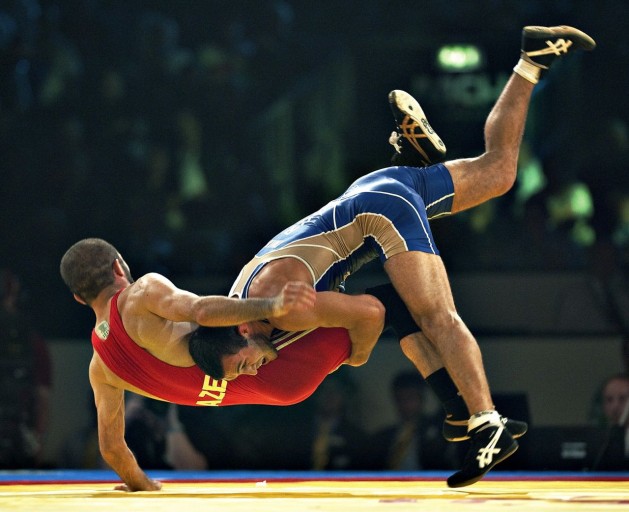 Not the answer you're looking for? Browse other questions tagged avot-patriarch-fathers genesis-bereishith yaakov-and-eisav .

8
Why did Hashem allow the angel fight with Yaakov?
8
Yaakov blessed the angel?
6
What was the effect of Yaakov placing his right hand on Efraim?
3
Eisav's angel fought Yaakov. Why Eisav's angel and not Gavriel?
2
Yaakov, Lavan, and the sheep deal(s)
1
Why was Eisav born before Yaakov?