In numerous locations in print and online, the following idea is told over in the name of Rabbi Meir Shapira, the founder of the Daf Yomi learning program. The quote is almost identical in every place I've found it:

Tossed into a stormy sea when his ship was wrecked, the great Talmudic sage Rabbi Akiva was given up for lost. This is how he later described his miraculous rescue to Rabbi Gamaliel: "A daf (plank) from the ship suddenly appeared as a salvation, and I just let the waves pass over me." (Yevamot 121a)

When Rabbi Meir Shapiro, the rabbi of Lublin between the two World Wars, initiated the program for Jews all over the world to study the same daf yomi (daily page of Talmud), he explained the significance of this undertaking by paraphrasing Rabbi Akiva: "A daf is the instrument of our survival in the stormy seas of today. If we cling to it faithfully all the waves of tribulation will but pass over us."

What is the origin of this quote from Rabbi Shapira? Is there any substantive evidence indicating that he actually wrote or said these words?

At the K'nesia Gedolah in 1980, the "Lev Simcha" - the Rebbe of Gur - quoted this statement in the name of Rav Shapira from the first Siyum HaShas.

[The Rebbe started Daf HaYomi of Yerushalmi at that time, and added that the words דף של ספינה - a plank from a ship - have the same numeric value as זהו ירושלמי - this is Yerushalmi.] 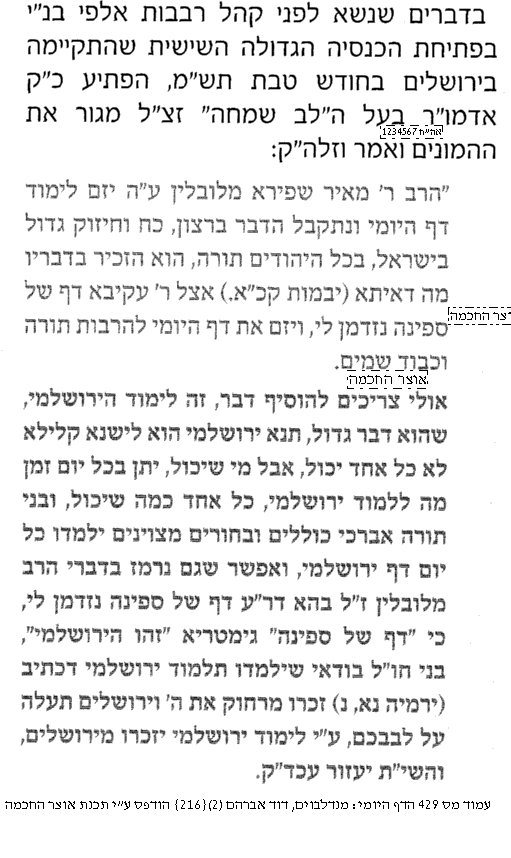 Not the answer you're looking for? Browse other questions tagged sources-mekorot quotations daf-yomi .