Four Minim at the time of the Great Revolt

This is a 5 Agorot coin bearing a copy of a coin from the 4th year of the Great Revolt (70AD) that pictures the 4 Minim: 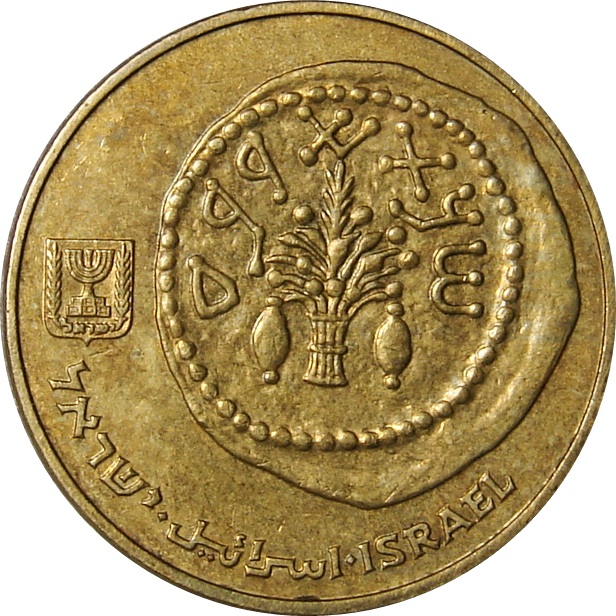 I can spot two oddities relative to what's commonly accepted: there are two Etrogim and Hadasim are full of berries.

In the context of the other coins minted during the revolt and siege of the 1st century, it is not surprising that the depiction of the species is less photographic of "full sets" and more representative of the mitzva and of the holiday. The symbol may have been an act of rebellion in itself, bringing distinctly Jewish practice, whose restoration they were trying to achieve, to the fore. This would be in keeping with the Jewish patriotic slogans adorning these same coins.

For other examples of the symbolic 4 species images on these coins, see this survey of the coins of that period and their meanings, particularly

Not the answer you're looking for? Browse other questions tagged history lulav-etrog-arba-minim .

5
A natural explanation for the significance of the numbers 7 and 40
9
The origins of davening
6
Bal Toisif on the Four Minim
10
What's the source for a Cheirem al pi Kabbalah?
3
Mehudar: a Subset of the Daled Minim?
2
Required to check the Arba Minim before the mitzvah?
5
Recommend introductory resources on Jewish traditions in the Balkans
6
Evidence of 2nd Temple Liturgy @Temple &/or Synagogue