Thinking about a mitzvah

Coming from a Reform Jewish perspective, since one is obligated to make as many mitzvot as possible, can one do machshava k’ma’ase’ for doing an actual mitzvah instead? If you think about a mitzvah, is that the same as actually doing it and performing the mitzvot? The Talmudic principle is, if you think about a subject it is as if you are doing it, so by that same logic, if you think about how nice it would be to do a mitzvah, are you good?

The reward for positive commandments is based on performing them or at least on the intent to perform them; if one is an onen (forced by circumstances) and unable to perform a given commandment but tries to do so, he is rewarded as if he had indeed performed it (see this question).

While one is not directly rewarded for imagining the performance a positive commandment that he could do but chooses not to, there is merit in doing so- if you imagine performing a mitzvah enough times, it may bring you to actually perform the mitzvah in real life.

In Michtav MeEliyahu, Vol 4, pp 252-253, (as quoted in the wonderful book "Praying with Fire", see image below) Rabbi Dressler brings the example of Rabbi Akiva, who on a daily basis imagined himself saying the Shema while being tortured to death as the ultimate sanctification of G-d's name. While actually being tortured to death by the Romans, he was indeed able to do so, since he had visualized the scene and practiced in his head so many times.

This is clearly a rather extreme example, but the principle remains the same for easier-to-achieve mitzvot. If you do not currently light candles on Friday night before sunset, but start visualizing doing so, you will eventually come to light Shabbat candles. 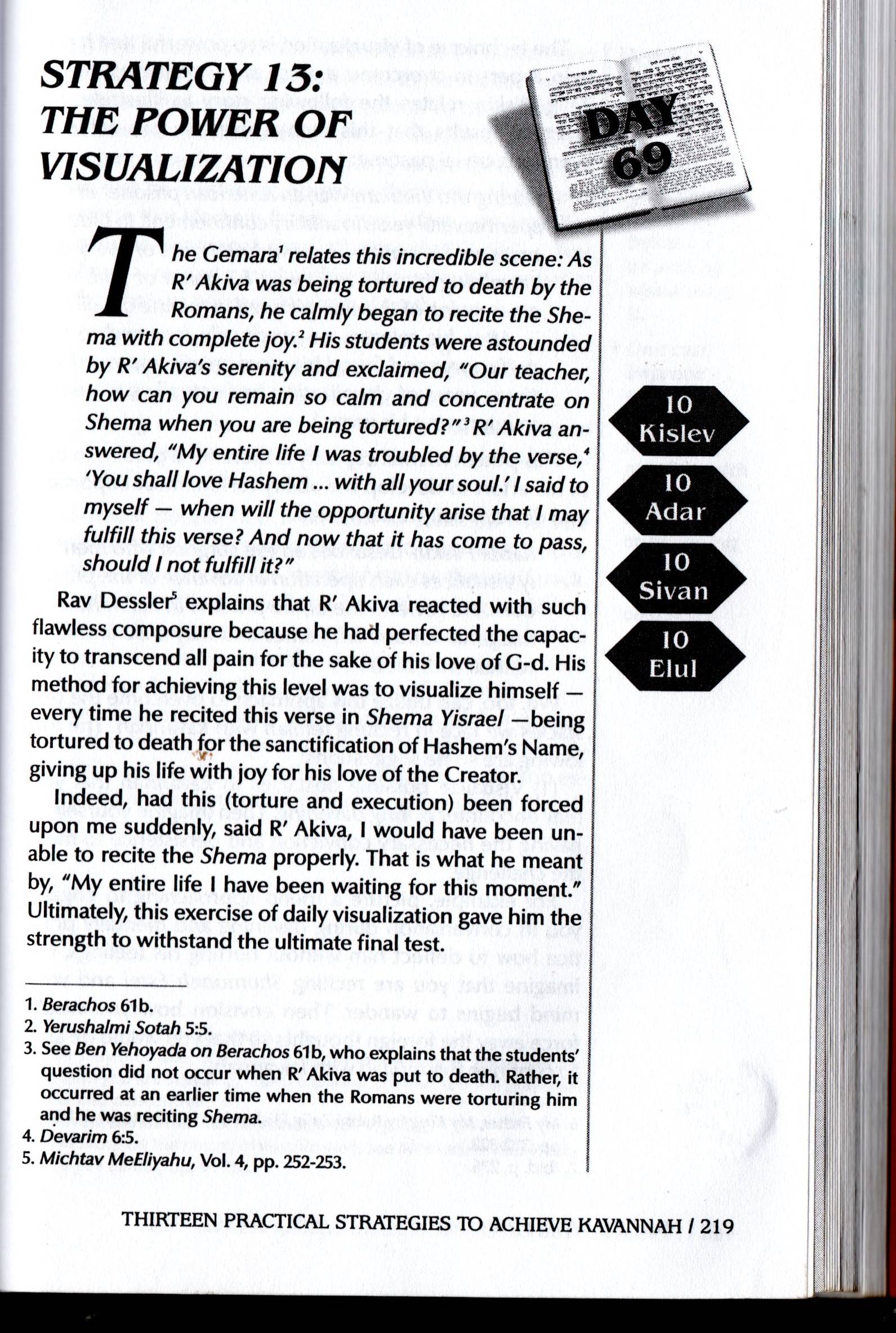 Not the answer you're looking for? Browse other questions tagged mitzvah .

8
Is there any reward for the intent or attempt to do a mitzvah?

7
Why kiss Tzitzith?
3
Sefirat ha'omer as Conditional mitzvah
5
Does a mitzvah fulfilled before one is obligated "count"?
11
Hiddur Mitzvah for a la'av - does it exist?
1
What is the Current Understanding of Mitzvah?
1
Performing mitzvot "in bundles"