What makes a smart phone "kosher"?

I have to admit that my phone is far smarter than me, and I am not "with it". So, I was surprised when a neighbor who is sending his kid to Israel told me that her kid needs a special "kosher" smart phone for use in his yeshiva.

When my kids went to yeshiva, the rule seemed simple. They weren't allowed to bring the phone into class. If they used it, it was confiscated and the school reported that they misbehaved. Sounds simple, I guess.

Apparently, something happened in the past ten years, roughly, and yeshivot are requiring a "kosher" phone. What is that about? Does it mean no web access at all; accessing specific web sites? No games? No apps at all, it's only for calls?

What makes this "kosher"? Is there a rav or Va'ad Harabanim certifying these phones? Are there different certifications? Who decides on the kashrut? Are there yeshivot or people that don't trust the kashrut of another smart phone? Are there specific brands or manufacturers that make such kosher phones? Do these cost more than other phones?

Sorry that I'm seemingly overloading the questions. This is not a Purim type question. I'm really puzzled by all this.

A good question, let me outline the situation in Israel:

20 years ago everyone used the same 2G Nokias, Sonys, etc. Some 15 years ago, with the latest developments in phone technology, namely SMS, cameras and Internet access a bold decision was made by religious (and political) leaders to make a clear distinction between "us "and they" - as expressed in phones.

The decree included two parts: 1. Phone must be from a certified source only (bought through Haredi channels from Haredi suppliers and dealers) 2. A phone must use a distinctive Kosher line starting with special digits (like 05272- or 05276- for Cellcom and 05484- for Partner). A deal was made that Kosher SIM cards (with Kosher numbers) were locked that they can be only used in Kosher phones.

While the first part was logical and supportive, the second was strictly "illegal" as about the same time the Knesset approved two laws of cellphones that, strangely, didn't apply to Kosher phones (I'm not into politics, so I don't know exactly how they did it): 1. all cellphones on the market must be sold unlocked allowing the clients free and painless switch between cell companies and 2. a person owns the number and keeps it when switching companies.

To enforce the order, all Haredi educational institutions from k-gardens to high Yeshivos were/are obligated to reject kids whose parents own non-Kosher phones (clearly seen by the phone numbers). Warning signs were put in all shuls and around the neighborhoods prohibiting entering with a smartphone (strangely the word iPhone (as the pioneer) was used almost exclusively for all smartphones, similarly to the Hebrew "פלאפון" used for all mobile phones, despite being the name of the first mobile provider) see examples here. 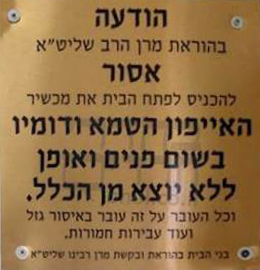 The bright side of the deal was that Haredis became a major consumer group which allowed a steep reduction of the prices of Kosher cell plans (with no data of course), usually half of a regular plan (20NIS vs 50NIS). So within a year, all Haredi world switched to those Kosher phones and plans (me included).

The problem began a year or two later when the same [poitical and economical] leaders felt the urgent need to switch to smartphones. That was unbearable, no Rabbi would allow that publicly, so the era of double-life begun - working Haredis bought two phones - one for work and one for their kid's school. The main problem, however, was the fact that smartphones had no filtering or protection whatsoever.

Initially, people were ashamed of being seen with a non-Kosher smartphone in public, but eventually, it became a norm, so another solution was needed and it came very fast - a couple of Haredi companies started to offer special Koshered smartphones also (each for its community):

The list of permitted apps differs between the companies, but usually includes the dialer, SMS, maps, Waze, WhatsApp, camera, banking, medicine, municipal services, e-siddurs and Jewish databases, tools and utils, etc. Many apps are banned just because of their use of [improper] ads. Internet browsers are disallowed.

Everyone can apply for additional apps and usually, it's approved within weeks.

Currently, there are 5 main providers of Kosher smartphones plus Internet Rimon that offers Kosher VPN service for any smartphone (targeting mainly the Kipot Srugot community).

As externally and by number, the new Kosher smartphones are indistinguishable from their undipped siblings besides the Kosher wallpaper, and as the result of numerous problems with Internet access, many wise guys simply buy a regular unlocked Android phone (one that is offered as a Kosher too), put a Kosher wallpaper, use underground services for engraving Kosher stamp on its back and using Rimon VPN כלפי שמיא.

Finally, back to 2G phones, as they eventually vanished from our markets, the Haredis continue to supply them from the third world countries - either old Samsungs and Nokias or branded Chinese phones (see here).

For Israel and the USA:

TAG certifies individual phones in the USA with a holographic sticker. Israel has a vaad that prints their hechsher directly on the phone (as is appropriate to their stricter standards, they don’t have a website). In short, a Kosher phone is one with limited technology and a hechsher attesting to that.

Some Kosher phones, particularly in Israel, have call only capabilities: no texting, no camera, no internet. Along the spectrum you will find Kosher phones with limited apps. In general, a Kosher phone does not have a working internet browser. As usual, to each their own standards.

There are generally two categories of Kosher Phones. The “most” kosher one is the basic phone. This can be either a flip phone or a feature phone with a slide-out qwerty keyboard. These phones are used by most of the Ultra-Orthodox and Hasidic groups. This phone does not have access to the internet or any apps. Some phones even go so far as to block texting and the camera as well.

However, even by these groups and especially by the broader Jewish religious population, smartphones are a reality. This brings us to the second category of Kosher Smartphones. There are a variety of filters and systems that are put onto smartphones which can remove all social media and browsing apps. Most Kosher Smartphones only have a few utility and grocery shopping apps but wouldn’t allow even apps like Amazon and eBay.

Not the answer you're looking for? Browse other questions tagged kashrut-kosher technology .

28
PTIJ: What is the Torah preferred brand of cell phone?
1
is it theft to enter shul with contraband?

15
What makes a wine kosher?
6
התראה by phone?
19
What is the meaning of psak?
4
What makes something chametz?
5
What makes a movie "kosher"?
13
Smart thermostat on Shabbos - what should one do?
0
Would humans with kosher-signs be kosher?
16
Are there any contemporary "Gedolim" that prohibit the use of davening from a smart phone?
4
What makes bread Pas Yisroel?
6
Different Smart/Sport Watches on Shabbat