What were the Hebrews' tents made out of?

There are multiple clear references to the Hebrews sleeping in tents during the Exodus. But what were they made of?

Keeping in mind that they did not have lots of time to prepare for the journey (though they knew leaving was possible for perhaps as long as a year), what materials would have been available to them?

Tent poles could have been made from bamboo or papyrus. But the tent itself is more problematic. Linen was available but not easy to come by. They had enough for clothing and other uses such as in the kitchen. It would take a monarch's wardrobe's worth of clothes to stitch together a tent able to hold a small family.

A fancy tent (of the kind we might imagine the Israelites' tents looked like) takes 58 yards (53 meters) of fabric (58-60 inches (147-152 cm) wide) and an awful lot of other materials to hold it together and stand it up. This does not include a floor. You could probably fit 8-12 people here (depending on how many are children). 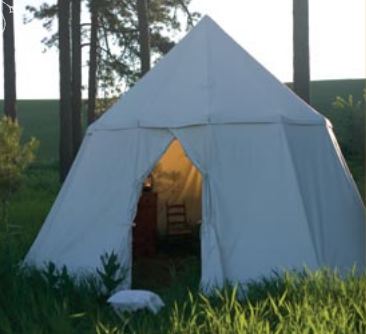 A lower tent with slanted sides, designed only for sitting up in, not for standing, would take less fabric. This one sleeps 2-4 but I could see getting 6-8 in there, if that includes small children and no storage space. 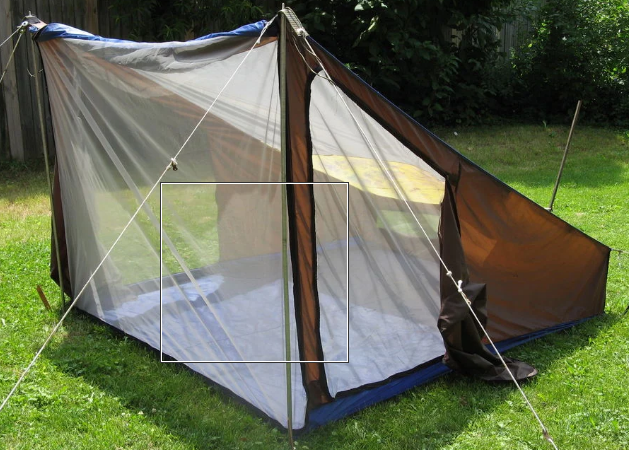 Even if you assume they're all crammed in there pretty tight and they are slanting the roof and there's no room to stand, it's still a lot of fabric for each family. Perhaps there wasn't a roof at all? If the sukkah comes from these tents, the roof would be reeds or something pretty light. Or nothing.

Nomadic peoples (like Abraham, Issac, and Jacob) would have fully realized tents, and the pack animals to carry them. But the Hebrews fleeing Egyptian slavery (where they lived in mudbrick huts)? Would they have full tents in the first few months after they left? Where would they have gotten the materials? And how could they have carried them?

Whether the concept of "tent" is metaphorical or practical, what does that look like and what materials did they use?

"…Near Mt. Sinai was a forest of Acacia trees. When they arrived there (Sinai) and were told that they would reside there for some time – and there was no (protective) cloud as I have already explained – each person constructed a hut … and they cut down the entire forest…." (Ibn Ezra . Peirush HaAroch Shemot 25:5)

Not the answer you're looking for? Browse other questions tagged yetziat-mitzrayim home-house .

9
Source that Avraham's tent was open on all sides?

22
What is the basis for eating in someone's house without a kashrut certificate?
7
Did Avraham invite the angels into his house?
1
Why would Pharaoh's heart be made כבד by G-D?
3
What date was the crossing of the Red Sea?
6
Phinehas' Birth: When could Eleazar have met one of Jetro's daughters?
6
Were Children of Israel killed in the plague of the firstborn?
1
Why were the 42 journeys needed to cross the desert?
1
Why did Pharaoh let the Jews out if he thought they were leaving for 3 days in order to serve hashem when they were alreadys serving hashem there?