The Talmudic principle of "chiddush" is sometimes invoked to explain certain areas of halacha. Namely, there are some rules and foundations that do not follow the usual halakhic rules, and thus their own rules cannot be extrapolated from or to other areas of halacha.

A couple examples of this principle of chiddush are:

Is there a comprehensive list of all the places in Shas where the Talmudic principle of chiddush is used?

The (Hebrew) Wikipedia entry on "chiddush" has a chart that lists 20 such instances in Shas where the principle of "chiddush"is invoked.

NOTE: for English translation of this list, please see below said image 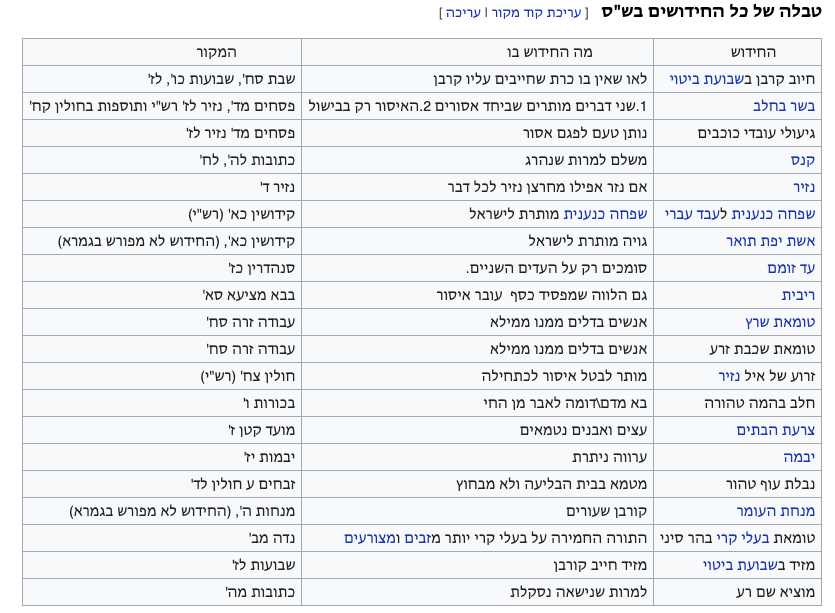 5) נזיר - an instance of accepting a nazirite vow upon oneself

15) יבמה - the widow of a childless man who has brothers

Not the answer you're looking for? Browse other questions tagged talmud-gemara chiddush-talmudic-principle .

5
Esrim - mi yodeya?
14
List of Halachot LiMosheh MiSinai
2
Is there a list of all of the cases in the Talmud where תיקו (“Teiku”) is said?
2
List of all the times the principle of “svara” is used in Shas

4
Why is the Talmudic style so Confusing?
8
Rav vs. Rabbi in Talmudic Times
0
Is there a list of current publishers of the Talmud?
2
What does it mean that the Shas was compiled with Ru'ach Ha'kodesh?
9
Instances in Shas where Tosfos quotes the Rambam?
2
Is there a list of all of the cases in the Talmud where תיקו (“Teiku”) is said?
1
Has nature changed since Talmudic times
2
Does a list of all perakim in shas with summary of each perek exist?