Rav Moshe Feinstein, zt’l,20 explains if the grain has not been ground down to flour, but only popped (e.g., popcorn, or the grit is rolled into corn flakes), it retains its Hoadama status. Kellogg’s Corn Flakes and Frosted Flakes cereal are made from recognizable corn pieces (called grits) that are not ground into flour, so the brocha is Hoadama. However, Kemach Brand Corn Flakes is made from corn flour; therefore, its brocha is Shehakol. The same is true regarding Corn Chex; therefore, the brocha is Shehakol.21 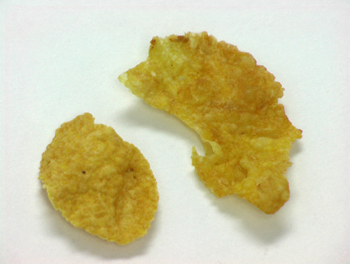 Kellogg’s Corn Pops is manufactured differently in various facilities worldwide. In the United States, the corn is not ground into flour, and corn pieces are used; therefore, the brocha is Hoadama.

I am having some trouble understanding the reasoning behind this distinction and was unable to locate the article by Rav Moshe to see if he explains it further. Why would the relative identifiability ("nikker" - "noticeable as corn") at an intermediate stage of production be relevant to whether the final product is identifiably corn? Is the idea that an expert would even be able to detect the identity of the final product, even if a layperson would not?

11
Berachos over food mixtures
5
Will a “lower” Berachah made MiSafek exempt a different food that requires that Berachah (and vice versa)?
2
How many calories are in a KeZayith of flour?
6
Confectioners glaze - non alcoholic
2
What blessing is made on a taco, burrito, or plain flour tortilla?
4
What bracha do you make on veggie straws?
5
minimum halachic definition of bread
5
Do people who don't eat gebrokts have any reason to say “Borei Minei Mezonot” during Pesach?
4
Controversy Concerning Community Consumption of Chametz Coming from Costco
1
What is the blessing on cricket bread?