What is R. Chananel's/R. Bachye's calculation of the years in Egypt?

In this answer I collected the opinions of various biblical commentators as to how many years the Israelites actually spent in Egypt. One of those views was that expressed by R. Chananel, as recorded by R. Bachye Ben Asher in commentary to Exodus 12:40. The line I want to focus on says:

The 430 years are counted from Isaac from the time that he was born. The 210 years are that they lived in Egypt a count of 210.

And after that came forth his brother, and his hand had hold on Esau's heel; and his name was called Jacob. And Isaac was threescore years old when she bore them. (Mechon-Mamre translation)

In the Mossad Harav Kook edition of R. Bechaye's commentary, R. Charles Chavel raises this issue in a footnote. He notes that all the commentators and Midrashim only have 400 years from Isaac's birth to the Exodus (including R. Bechaye himself elsewhere), and that this calculation is demonstrably correct based on the numbers we know. He further notes that he could not find this view (that the 430 years were from Isaac's birth) anywhere, though he did find a couple of others who raised this question. Lastly he notes that this is even more perplexing because R. Saadia Gaon has the 430 years as beginning from when Abraham left Ur Kasdim, and R. Chananel usually follows R. Saadia Gaon.

Here are images of the footnote: 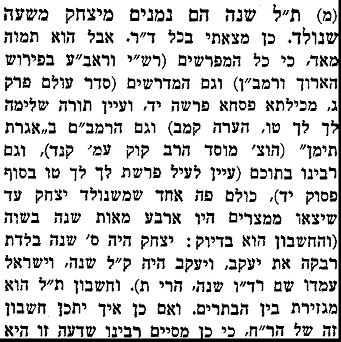 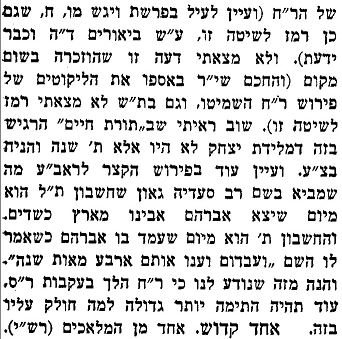 In the Mossad Harav Kook edition of Peirushei Rabbeinu Chananel Al Hatorah, R. Chavel again raises this issue in a footnote, noting that he was unable to resolve it in his note to R. Bechaye's commentary. However, he says that he has now found the answer. He saw that Abarbanel quotes a similar explanation about there being three end times, but Abarbanel lists the three times as 430 years from Abraham's covenant, 400 years from Isaac's birth, and 210 years actually spent in Egypt. R. Chavel thus argues that the text in R. Bechaye's commentary is corrupted, and it mixed up the 400 and the 430 years. In truth it should say that the 400 years began from Isaac's birth, just like Abarbanel says.

R. Chavel further adds that the proof that this is correct is that otherwise R. Bechaye/R. Chananel listed the three times out of order. In our current texts it mentions the 400 years, then the 430 years, and then the 210 years. But 430 should really come before 400. Therefore it must be that the 430 did come before the 400, and in our versions it is simply a mistake.

Here is an image of this footnote as well:

Like is seen in the link you provided to Rabbeinu Bechaye to Shemot 12:40, there are three different lengths of duration for the Egyptian exile. How each of them plays out is dependent upon the merit of the Jewish people.

To clarify, the actual translation of Rabbeinu Bechaye's opening comments in your link are the following:

We find in regard to the Egyptian redemption three appointed times (Keitzim). And they are 400 years, 430 years, 210 years.

400 years are counted from the beginning of the seed of Avraham (meaning Yitzchok) quarreling with their poverty and vacillation and the persecution of his brother (meaning Yishmael) like it says in Bereshit 21:1-12. And they will cause them to serve and afflict them 400 years. And in regard to this (phrase) is included quarreling and subjugation.

430 years are counted from Yitzchok, from his concern that he be born.

It’s possible to understand this as from the moment that G-d concerned Himself with Avram's worry about not having any biological heir from his wife, Sarai and G-d told of Yitzchok's birth to Avram in Bereshit 15:1-6, because G-d’s word (His thought) is considered generally as if it is actually done (It is equated with action.). This in in keeping with the Alter Rebbe's explanation of Rambam's approach found in Mishnah Torah, Hilchot Yesodei HaTorah 2:10, as found in chapter 2 of the Tanya.

The actual Hebrew משעה שנולד can be translated as 'from when He was concerned that he be born'. שעה here is a verb in past tense from the root שעה, שעי second definition, as appears in Jastrow.)

The Redemption from Egypt actually took place in 2448.

Following Ramban's accounting to Shemot 12:40, Avram was born in 1948 from the creation. He was 70 years old at the Covenant between the Halves which took place in Israel. That would have occurred in 2018. The year 2018 is the 430 years that was foretold.

He descended to Mitzrayim and returned to the land of Israel at the age of 75 in the year 2023.

Yishmael was born in 2034. When he was 13 years old, he was circumcised together with Avraham and his household in the year 2047.

One year later, Yitzchok was born, in 2048, and was the first individual to fulfill the mitzvah of Milah at 8 days old. The year 2048 is the 400 year time of the Egyptian exile.

Yaacov was born to Yitzchok when Yitzchok was 60 years old. That was in the year 2108.

Yaacov was 130 years old when he entered Mitzrayim to meet his son, Yosef. That was the year 2238. From the year of the redemption from Egypt in 2448, to the time that Yaacov enter Egypt was 210 years. And this is the fulfillment of the prophetic statement from Yaacov to his sons mentioned in Bereshit 42:2 and as commented upon by Rashi. It also corresponds to 190 years from the time of the birth of Yitzchok (2238-2048 = 190) and hints to the concept of the redemption occurring then, without any hardship, if the Jewish people merit it (190 is קץ).

17 years later was when Yaacov passed away in the year 2255. It was from this time forward that the affliction aspect of the Egyptian exile started to become severe. And this period culminated with the passing of Yosef and his brothers like is recorded in Sefer Yashar. With the passing of each of the sons of Yaacov, it became more harsh.

Moshe was 80 years old in the year 2448, when the Redemption from Egypt took place. That places the year of his birth in 2368 which was 113 years after Yaacov had passed away.

Kehat, Moshe's Grandfather, lived for 133 years and was also one of the 70 souls counted with Yaacov, when Yaacov entered Egypt in 2238. If you deduct the 113 years from the birth of Moshe to the passing of Yaacov, that leaves Kehat as a 20 year old when Yaacov dies and 3 years old when he first entered Egypt. But all of this is contingent that Kehat died shortly after Moshe's birth. There is a 3 year margin of error from the birth of Moshe to when Kehat passed away.

Rabbeinu Bechaye, at the end of the citation you bring says that what Rabbeinu Chananel is agreeing with is the concept that there are three time frames connected with the Redemption from Egypt and that how each one plays out is related to the merit of the Jewish people. He also explains that this relates to the final redemption mentioned by Daniel the Prophet.

Not the answer you're looking for? Browse other questions tagged parshanut-torah-comment mathematics .

4
How long was the period of Oppression

13
20 years for Sin, 7 years for beauty
5
Questions about the Beginning of Vayechi
6
Why was Yaakov punished for not honoring his parents?
4
What happened to Canaan during the famine after Yaakov et al went down to Egypt?
2
How can we explain the growth of Israelite population in Egypt?
6
Joseph's interpretation of 7 years of famine - was his prediction false?
4
What is the Jewish understanding of Micah 5:1
1
Why didn't we prepare bread in Mitzrayim the night before?