There is a belief that if one did not make a kiddush for the birth of his daughter and that woman is having a hard time finding a shidduch, then they should make a kiddush and it will help.

I know from a halachic standpoint there isn't any obligation to make a kiddush, so where did this idea come from?

The Rav of Congregation Ahavas Israel, Passaic, NJ debunks the legend about this story here (edited).

So the idea is a made-up story.

Rabbi Yaakov Yisrael Kanievsky, known as The Steipler (1899–1985) was reported to have told a father of a woman who was having difficulty in finding a shidduch that the reason she was experiencing such difficulty was the fact that upon her birth her father failed to make a kiddush in her honor. As brochos are traditionally bestowed upon the new born baby girl for her to grow and marry at the kiddush, since the father did not have a kiddush in her honor no brochus were bestowed and therefore she is now suffering with not finding her ‘bashert’.

This Shtetl Legend appears in Jewish story books and I myself was present at a Kiddush where a Rabbi related the story.

In the Sefer Derech Sicha (volume one page 33) - a compilation of Torah thoughts by Rav Chaim Kanievsky Shlita (the ONLY son of Rabbi Yaakov Yisrael Kanievsky Zt”l) it is related that when he was told of this ‘quote’ from his father he responded: “Who made this up? Wouldn’t I have heard about it?! He never said to make a kiddush in our family.”

I myself asked Rav Chaim about this Shtetl Legend quoted in the name of his father and he debunked it to me as well while adding, “perhaps for the first daughter you could (if you want) make a Kiddush) however, there is no obligation to make a Kiddush for a daughter at all and my father never said there was.” 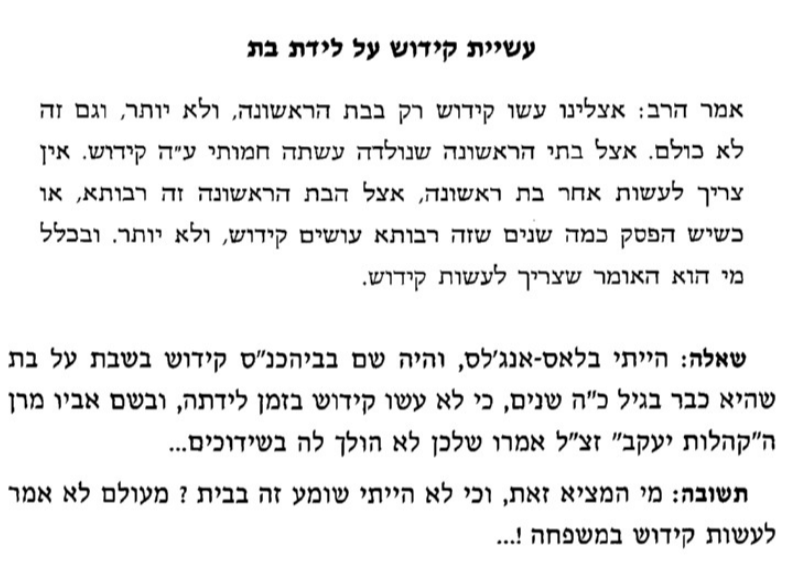 Not the answer you're looking for? Browse other questions tagged sources-mekorot minhag shidduchim-dating .

11
Baby boy's MOTHER as the sandek(et)
9
How/why does kaparot work?
0
Question on Mordechai -- Chiyuv m'drabbanan being motzei chiyuv m'doraisa
4
Segulot for finding a Shidduch
13
Is it improper to invite a few single girls and a few single boys for a Shabbos meal to help fight the "shidduch crisis"
3
Payment for Shadchanim
11
Does every woman have a destined match?
5
Include "al hagefen" if just had a sip of grape juice when anyways saying me'ein shalosh